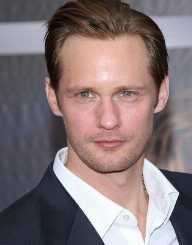 Alexander Skarsgard is an outstanding actor best known for his role as Vampire Eric Northman on HBO’s series, ‘True Blood.’ He is also the title character in ‘The Legend of Tarzan’ and won an Emmy Award for his role as Perry Wright in an HBO mini-series, ‘Big Little Lies.’

Alexander Skarsgard is the eldest son his parents Stellan Skarsgard and My Sonja Marie Agnes, born on August 25, 1976, in Stockholm Sweden. His father was the director of the film, ‘Ake and His World’ which he featured Skarsgard with the role of Kalle Nubb.

In 1989, he starred in a Swedish television production, ‘Hunden som log’ (The Dog That Smiled) a role that earned him fame at the age of 13. However, Skarsgard did not enjoy the popularity and decided to quit acting. Later at the age of 19, he served in the Swedish military with a unit that dealt with anti-terrorism in Stockholm.

In 1996, Alexander Skarsgard enrolled at Leeds Beckett University to study English. While at school, he reconsidered acting and enrolled in a theatre course at Marymount Manhattan College which enlightened him on what he wanted to act.

In 2001, Alexander Skarsgard played the role of Meekus in ‘Zoolander’ followed by ‘ Hundtrictet-the Movie(The Dog Trick)which earned him a Gulbagge Award Nomination and named the Sexiest Man in Sweden. Skarsgard moved to Los Angeles in 2004, and played the role of Sergeant Brad in a miniseries, ‘Generation Kill’ filmed in Namibian Desert. He also played Eric Northman in an HBO series, ‘True Blood.' The final season of the series launched in June 2013.

In 2009, he appeared in Lady Gaga’s video of ‘Paparazzi’ and voiced Stefan in an animated film, ‘Metropia.' Additionally, he voiced Stefan in ‘Metropia’ a laminated film followed by a role as Alex in ‘Trust Me’ in 2010.

In 2010, Alexander Skarsgard provided the character of Terje in the British Mockumentary, ‘Beyond the Pole.' This act was followed by another voice role as Moomintroll in an animated series, ‘Moomins and the Comet Chase.’

Later in the same year, he appeared as a model in The Wall Street Journal Magazine, 'GQ,' and 'Details.' He also portrayed the cover of 'Rolling Stone,' the September of 2010 issue alongside 'True Blood' Co-stars, Anna Paquin and Stephen Moyer.

In 2011, Alexander Skarsgard starred Kirsten Dunst alongside Charlotte Gainsbourg and Keifer Sutherland in ‘Melancholia’ which they performed at the Cannes Film Festival. Additionally, he played the lead role in the remake of 1971 film, ‘Straw Dogs’ as Charlie Venner alongside James Marsden and Kate Bosworth.

In 2012, he played alongside Taylor Kitsch and Rihanna in ‘Battleship’ followed by a starring role in the film, ‘What Maisie Knew’ based on Henry James’ novel. Additionally, he cashed in a thriller ‘Disconnect’ which he played alongside Paula Patton.

The following year, Alexander Skarsgard starred in ‘The East’ alongside, Brit Marling and Ellen Page. He also appeared in several films such as ‘Disconnect’ as Derek Hull, played the role of Banji in ‘The East.' Notably, in 2016, he played, ‘The Legend of Tarzan’ as the title character followed by a lead role in HBO’s ‘Big Little Lies.’ His proactivity earned him a Primetime Emmy Award for his outstanding performance in a Limited series or movie.

Alexander Skarsgard enjoys watching Swedish Football and supports Hammarby IF club. In October 2010, he auctioned several items he had autographed to raise money to help Hammarby Football club. Triumphantly, he received an honorary degree from Leeds Beckett University in July 2011. He served as the ambassador during a fundraising event for the wounded Soldiers in America.

Commendably, Alexander Skarsgard won two awards in 2003 including an Odense International Film Festival and a Guldbagge Award nomination for the Best Supporting Actor.

In 2009, he won two awards, A Scream Award and Satellite awards. He also received a nomination for a Satellite Awards for his outstanding performance in ‘True Blood.’ In the year 2010, Skarsgard received three nominations for a Saturn Award, NewNowNext Awards, and a Scream Award. He also won a Scream award as the Best Horror Actor in the series, ‘True Blood.’

During the year 2012, Alexander Skarsgard received two nominations for the Best Supporting Actor, a Robert Award Nomination, and a Fangoria Chainsaw Awards nomination. Recently in 2017, he won an Emmy Award for his outstanding role in ‘Big Little Lies.’