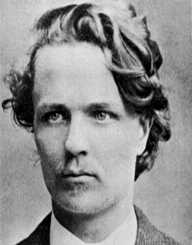 August Strindberg was a Swedish playwright and novelist and is known as ‘the Father of modern Swedish literature.’

Strindberg was born in Stockholm, Sweden on 22 January 1849. Strindberg’s father, Carl Strindberg, worked as a shipping agent and his mother, Eleonora Norling, was a maid. His mother died when Strindberg was thirteen, and his father married Emilia Patterson who worked as a governess for the Strindberg’s. Strindberg had an unhappy childhood. He had a poor relationship with both his mother and stepmother. Strindberg was also unhappy at his early schooling in the Klara district of Stockholm. He found the Stockholm Lyceum more to his liking and excelled at religion, science, and photography. After graduation, Strindberg attended Uppsala University. To support himself Strindberg work as a schoolteacher. Strindberg began studying chemistry but ultimately failed his exams in the subject.


Work As A Writer

Having failed at chemistry Strindberg began studying aesthetics and modern language. Strindberg started a literary club in the university and the group would read and critique each other’s work. 1870 saw Strindberg publish his first literary work and the comedy In Rome was performed at Sweden’s Royal Theatre. The play received some mild praise but Strindberg felt deeply embarrassed by it after seeing it performed. Strindberg copied the Shakespearean technique of using modern speech in historical plays. Using this technique he rewrote the historical tragedy Sven the Sacrificer as The Outlaw. This attracted a lot of criticism and controversy as many considered historical works as deserving a certain standard of reverence. Strindberg in spite of this received Royal patronage from King Charles XV. Strindberg left Uppsala University without graduating and would later write very critically of the institute in his book on his student life, Town and Gown. 1879 saw Strindberg reach his lowest point as he was declared bankrupt but by the end of the year he had his breakdown as his novel TheRed Room was published. The book received huge critical acclaim in Denmark, while Swedish audiences were more lukewarm to it. Strindberg was lifted by the success of his novel and quickly followed it up with an historical drama The Secret of the Guild. The play was accepted by and performed in the Royal Theatre.

Strindberg had become famous and his older previously rejected writings began to be published. Strindberg also wrote articles and essays at this time and Studies in Cultural History was published an anthology of his writings on Swedish culture. 1883 saw Strindberg release his most successful play to date Lucky Peter's Journey. Strindberg again stoked controversy in 1884 as his series of short stories, Getting Married, saw him tried for blasphemy. The book promoted the view that women and men were equal and this scandalised much of Sweden’s upper class. Strindberg was acquitted of the charges. Strindberg became disillusioned about life in Sweden and began to travel he lived in a number cities in Switzerland and France for short periods. While in France Strindberg began to write in French and chose more contemporary settings for his works. The most notable works from his time in France were the play Comrades and the novel The People of Hemso. Strindberg next moved to Germany and began to abandon fictional work in favour of more scientific writings. He also began work on an autobiography, The Son of a Servant, which would eventually span four books.

Strindberg became heavily influenced by Naturalism and the works of Charles Darwin. Strindberg’s play Miss Julie was a dramatization based on Darwin’s theories. Strindberg would eventually come disillusioned with Naturalism and developed writer’s block. He also suffered from depression and a drinking problem. Although he continued to write about science and botany Strindberg drifted towards mysticism and Symbolism in his later work. The early 1900s saw Strindberg enter a very productive period as he wrote some historical plays. These were to form a history of the world series but he later abandoned the idea. Strindberg returned to Sweden and was in constant demand from sponsors and theatres. He died on 14 May 1913. Just before his death Strindberg’s plays had been translated to English and been published in America.

Strindberg married his first wife Siri von Essen in 1877. Strindberg was infatuated with his actress wife and wrote some plays for her to perform in. Siri had a great effect on Strindberg’s writing, and the disintegration of their marriage was reflected in his work. They had three children together, Karin, Greta, and Hans. Siri also lost a child to premature birth during their relationship. The two divorced in 1891. In 1893 he married a young German writer, Frida Uhl, the marriage was soon dissolved although they had a daughter, Kerstin, together. Strindberg was forty-one years older than his third wife, Harriet Bosse. Their marriage was short-lived, lasting from 1901 to 1904 and produced a daughter, Anne-Marie.

Strindberg was raised as a Lutheran by his family. During his time out of Sweden, Strindberg drifted through some beliefs and philosophies. He abandoned Lutheranism and became an atheist and was drawn to the work of Rousseau while he lived in France. Upon moving to Germany, he began to identify with the writings of Friedrich Nietzsche. While married to his second wife, Frida Uhl, he became influenced by Catholicism. In his later life, he was influenced by Swedenborg’s writings on divine providence and claimed he felt the Christian God influence his life after that.

Like his religious and philosophical beliefs, Strindberg’s political views were ever changing. While in France Strindberg was drawn to the history of the Paris Commune. He was interested in the class struggle but did not write excessively on any particular topics. Instead, most of Strindberg’s political writings are concerned with attacks on individuals or institutions he felt aggrieved by. Strindberg’s early writings were very egalitarian, but as his relationships with his wives soured, he was prone to misogyny. Despite this due to the targets of Strindberg’s ire were the upper classes his writings remain very popular with socialists.