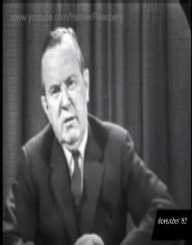 Lester B. Pearson was the Canadian Prime Minister in the 1960s and an influential Canadian of the 20th century. He made many initiatives for his country and received the Nobel Peace Prize for his diplomatic work.

Lester B. Pearson was born on April 23, 1897, in Newtonbrook, Ontario, Canada. His father Edwin was a Methodist minister.

In 1913, Lester B. Pearson graduated from Hamilton Collegiate Institute. He then enrolled at Victoria College at the University of Toronto. Pearson earned a Massey scholarship to attend St. John's College in Oxford. Lester B. Pearson completed his studies in 1925 with a M.A. degree After World War I, he earned his Bachelor of Arts degree from the University of Toronto in 1919.

When World War I started, Lester B. Pearson was in the medical corps. He was stationed in Egypt and Greece for two years. As the war progressed, he trained as a pilot. His plane crashed during training. In 1918, Lester B. Pearson was hit by a bus during a London blackout. After that point, he was discharged from service. Between his bachelor and masters degrees, Lester B. Pearson worked at meat-packing companies in Hamilton and Chicago. After he finished his master's degree, he taught at Toronto University. With a strong sports background, he was also the coach of the Varsity Blues Canadian football team as well as the ice hockey team.

In 1927, Lester B. Pearson took the Canadian Foreign Service Entry exam. He earned top marks. This allowed him to enter a career as a public servant. He started in the Department of External Affairs. The Prime Minister at the time, R.B. Bennett, encouraged this star tester into major roles. From 1939 to 1942, Lester B. Pearson was second-in-command at Canada House. In 1945 he was assigned as the Canadian Ambassador to the United States. His role also helped in the creation of two new organizations, the United Nations and NATO.

Lester B. Pearson was a member of the Liberal government. He was assigned the role as Secretary of State for External Affairs in 1948 by the Prime Minister Louis St. Laurent. Pearson also won a seat in the Canadian House of Commons.

In 1958, Lester B. Pearson was elected leader of the Liberal Party. While his party lost many of their seats in the national election that year, Pearson developed new ideas for the country and led his party to victory in the 1962 elections.

Lester B. Pearson was sworn in as the 14th Prime Minister of Canada in 1963. During his time in office, he made many changes and updates. For example, he called for universal health care, a 40-hour work week, and a new minimum wage. Other social reforms included the Canada Lester B. Pearson Plan and Canada Student Loans. He kept his country out of the Vietnam War and called for a temporary cease-fire of American bombing. Not only did he start a Royal Commission to create legal equality for women, but he also created one on bilingualism and biculturalism.

French became an official language as well as English. His work encouraged that future Prime Ministers were fluent in both languages. He also unified Canada under one flag, the Maple Leaf flag. There was no official flag before he was in office. He accomplished all of these things while heading an minority government.

Lester B. Pearson married Maryon. The couple had a son, Geoffrey and a daughter, Patricia. Some of the work that Pearson's government introduced is still used in Canada today. This includes universal health care as well as a national pension plan.

However, it was his work organizing a response to the Suez Crisis that earned him international acclaim. He created the United Nations, Emergency Force. This is considered the beginning of modern peacekeeping. Lester B. Pearson died on December 27, 1972, at the age of 75.

• British War Medal and Victory Medal as member of Canadian Armed Forces
• Nobel Peace Prize
• Companion of the Order of Canada
• Inductee of Canadian Peace Hall of Fame
• Recipient of honorary degrees from 48 universities
• Schools, institutions, and civic structures named after him

Lester B. Pearson had a tumor in his right eye in 1970. He had it surgically removed. Cancer spread to his liver, and Pearson died from the disease.

Lester B. Pearson was active in sports in his school days. While he was at St. John's College, he was a strong player in sports such as ice hockey, lacrosse, and baseball. Pearson played on the semipro Ontario Intercounty Baseball League.