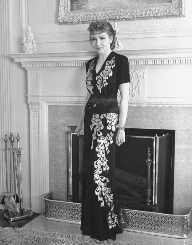 Actress Claudette Colbert was born on the 13 September 1903. She was the daughter of Georges Claude Chauchoin and Jeanne Marie, a French couple who lived in Saint-Mandé, France. Her parents nicknamed her Lily, after the legendary English actress Lillie Langtry. Colbert’s mother was British by birth and was bilingual. She was one of two children and had an older brother, Charles.

Colbert’s father George immigrated to the US in 1906, and five years later he sent for his family.

Around that time her parents officially changed her name to Lily Emilie Chauchoin. They lived in a fifth-floor apartment in Manhattan. Lily and her brother started school at the P.S.59, close to where they lived. In 1916, Colbert was hit by a motor car on a busy street and took months to recover.

Claudette Colbert began her training at the P.S. 59 school in Manhattan. She did her high schooling at the Washington Irving High School which had an arts programme with a good reputation. Colbert was interested in art, especially painting, but one of her teachers encouraged her to audition for a play. She got the part, and her first theatrical performance was in The Widow’s Veil, at the Provincetown Playhouse in 1919. After high school, Colbert decided she wanted to become a fashion designer and enrolled in the Arts Student League of New York.

To make money to put herself through art school, Claudette Colbert used to work in a store, and she also gave French lessons. One of her students introduced her to Anne Morrison. Morrison was carving out a career as a playwright in New York City and was becoming quite well-known when they met. She found Colbert exciting and asked her to audition for her play, The Wild Westcotts. It was a tiny part, but it gave Colbert a taste of acting on Broadway. She then adopted the stage name of Claudette Colbert. Stage producer A.H. Woods saw the performance and offered Colbert, a contract with his company. She took up his offer and subsequently spent from the mid to late 1920s appearing on Broadway and traveling around the nation in touring troupes.

Travelling to London in 1927, Claudette Colbert appeared in The Baker and won many accolades for her performance. After her contract had run out with A.H.Woods, Colbert turned to screen acting. Her first role was in the film For The Love of Mike (1927). This movie was not a success but The New York Times reviewer was kind to Colbert. The film, The Lady Lies, was shot in the day while she was also doing stage acting at night. After the stock market crash of 1929, stage productions were affected. Colbert then signed with Paramount Studios. Her contract stipulated that films were to be made Queens, not Los Angeles. Her first role was in Hole in the Wall, followed by The Young Man of Manhattan. During the early 1930s she in starred in Manslaughter (1930), The Mysterious Mr. Parks and The Smiling Lieutenant (1931). Then Paramount closed their studio in New York, and Colbert had to move to Los Angeles.

Claudette Colbert’s first Hollywood film was The Sign of the Cross (1932) playing a Roman princess. She won rave reviews, and Paramount renewed her contract. She had found her feet in Hollywood and acted in some different genres including singing in Torch Singer (1933). Colbert appeared with leading man Clark Gable in It Happened One Night 1934) This won her an Academy Award for Best Actress.

The film also won Best Director and Best Picture. Clark Gable won Best Actor. Her next movie was Cleopatra (1934). She then appeared in John Stahl’s Imitation of Life (1934). Private Worlds (1935) gave her her second Academy Award nomination. All of this established her as a star, and in 1938 she became the highest paid woman in Hollywood. Colbert had a long career, and she even returned to the stage at age 82, when she starred with Rex Harrison in Aren’t We All?

Claudette Colbert won an Academy Award for Best Actress in 1934 for It Happened One Night and received a second nomination for Private Worlds (1935). Then in 1960, she was awarded a star on the Hollywood Walk of Fame. As late as 1988, she won a Golden Globe Best Performance by an Actress in a Supporting Role for The Two Mrs. Grenvilles (1987).

Claudette Colbert was married twice. Firstly to Norman Foster (m.1928-d.1935) and then to Dr. Joel Pressman from 1936 until his death.

Claudette Colbert visited Barbados in 1960, fell in love with the island and bought an old plantation house which she had renovated and restored to its former colonial beauty. She made plans with her husband Pressman to retire there with him but in 1967, he was diagnosed with advanced cancer, and he spent his last few months in the USA.. Pressman died in 1968, aged 67. Colbert had her husband buried on their property in Barbados. Colbert and Passman had a happy marriage, and she was heartbroken at his relatively earlier death. Colbert spent the last thirty years of her life in Barbados, although she did have an apartment in New York and a flat in Paris.

In July 1993, Claudette Colbert died in Barbados in her ninety-third year, in July 1996.