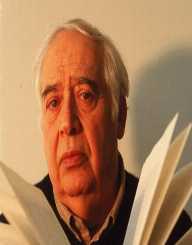 American literary critic Harold Bloom was born in New York City on the 11 July 1930 to immigrants Paula Lev and William Bloom. His parents were Orthodox Jews, and he grew up in a Yiddish household. He was the youngest child in the family and had a brother and three sisters.

He attended the Bronx High School of Science before obtaining a BA in Classics from Cornell University (1951), followed by a doctorate from Yale University (1955).

Early in his career, Harold Bloom began defending the High Romance poets of the 19th century against Neo-Christian critics. His first book Shelley’s Myth-making reflected this and changed the way many critics at the time thought about Shelley. In the late 1960s, Bloom focused on Sigmund Freud, Emerson and the mystic traditions of Gnosticism, Kabbalah, and Hermeticism. Around this time he described himself as a Jewish gnostic and in later years when his wife said in an interview that they were both atheists, he refuted the suggestion.

His books in the 1970s reflected the struggles of poets to create with poetic vision; these included Yeats which was an examination of the writings of the Irish poet. His next book was The Anxiety of Influence (1967), and A Map of Misreading followed and a study of the poet Wallace Stevens. Bloom then wrote a sequel to the fantasy novel by David Lindsay A Voyage to Arcturus. He later said that he disliked the book and would like to remove it from circulation. During the 1970s and 1980s, Bloom continued his work into influence theory. He acknowledged that his early work could be complicated and in the 1990s turned to criticism aimed at a more general readership. This later work includes his introduction and commentary on The Book of J (1990).

Harold Bloom published The Western Canon in 1994 which surveyed the major literary works of Europe and the Americans beginning with the 14th century. His overall position is that politics has no place in literary criticism. In Jesus and Yahweh: The Names Divine (2004), he predicted that Mormon and Pentecostal American Christianity would overtake mainstream Protestant divisions in popularity.

In 2010, Bloom became a founding patron of Ralston College in Savannah Georgia, a college that focuses on primary texts. Other books include Shakespeare: The Invention of the Human (1998). How to Read and Why (2000) and The Shadow of a Great Rock: A Literary Appreciation of the King James Bible (2011).