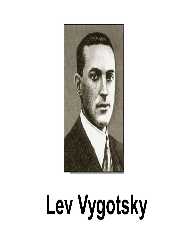 Lev Semyonovich Vygotsky was born on November 17, 1896, in Orsha, a town in Belarus (part of the Russian Empire then) into a wealthy Russian-Jewish family. His father was a Banker, and his mother chose to be a house maker though she was a trained teacher. In his early childhood days, he grew up in the Belarusian City Gomel and received his primary education there. He showed signs of brilliance from a very young age and performed wonderfully well in his early education.

After graduating from secondary school, Lev Vygotsky was admitted to the Moscow University in 1913 under a Jewish student quota of three percent used for admission to the Universities of Moscow and St. Petersburg. The lucky winners of a Jewish lottery were selected for entry into the coveted Universities. He started pursuing the study of medicine as his parents were keen to make him a doctor. During the first semester, he realized that his interest did not lie in the study of medicine and consequently, he got transferred to a law school. He graduated from the law school in 1917 and simultaneously studied his pet subject of Psychology privately along with the study of different art subjects of his interest.

Lev Vygotsky returned to Gomel after completion of his graduation. After his return to the city of Gomel, the German invasion and the civil war had brought in turbulent times. During these years, he maintained anonymity and almost no information is available about his life during these two years. Eventually, in 1919, Bolsheviks took control of the town. Vygotsky actively participated in the great social evolution under the Bolshevik rule. From 1919 to 1923, he was an important member of the Bolshevik Government of Gomel town.

Lev Vygotsky attended the Second All-Russian Psychoneurological Congress in Leningrad in January 1924. During this Congress, he showcased a presentation which explained the methods of reflexological and psychological investigations. His presentation attracted a lot of attention, and the Psychological Institute in Moscow sent an invitation to him offering a position of a Research Fellow in the prestigious Institute. He embarked on a career as a second class staff scientist at the Psychological Institute. He completed his thesis on the Psychology of Art in 1925 as his first research project. He had a fascination towards child psychology and was very interested in the education of children with learning disabilities. He subsequently established a laboratory of psychology in Moscow for abnormal children.

In 1925, Lev Vygotsky went to London, his only overseas trip, to attend a Congress organized for the education of the deaf. After his return to the Soviet Union, he fell severely ill due to a relapse of tuberculosis. He was hospitalized, and the recovery took almost a year. The disease damaged him and temporarily rendered him jobless until the end of the year 1926. However, he survived and then concentrated on researching on the crisis in Psychology.

Lev Vygotsky started documenting his theoretical and methodological work in this field but was unable to complete the document. The unfinished report was later published in 1982, almost 50 years after his death with suitable modifications and editorial interference. It is regarded as one of the most important works of Vygotsky.

Working relentlessly on child development, Lev Vygotsky made judicious use of innovative psychology and made significant contributions to the evolution of developmental psychology and educational philosophy. In his famous sociocultural theory, he asserted that children’s learning process is critically related to social interaction with people of different age groups and is instrumental in the improvement of their psychological development. Children go through a continuous process of learning due to such social interactions.

During 1926-1930, Lev Vygotsky was involved in a research program exploring the development of higher cognitive functions of logical memory, selective attention, decision making and language comprehension. Along with a group of students, he studied the situation from three different angles, an instrumental angle, a developmental approach and a cultural-historical approach.

In the early 1930s, Lev Vygotsky went through deep personal and professional crisis. He was under the severe phase of self-criticism and started reconstructing several of his theories after recognizing various imperfections in them. The influence of holistic theories propagated by some German-American scholars popularly known as the proponents of the Gestalt Psychology had a profound impact on him. His radical revision and significant theoretical shift mostly remained unfinished due to his premature death.

Lev Vygotsky is best known for his two major works, the sociocultural theory and the Zone of Proximal Development. Also, his theory of Guided Participation is also considered as one of his major works. His pioneering effort in the field of Psychology was well documented in the six books published during a ten-year period of his career. One of his highly acclaimed books ‘Thinking and Speech’ threw light on the connection between language development and thought. The book was published posthumously.

However, Lev Vygotsky's theories were not well-received, and the knowledgeable contemporary people were skeptical about his theories and inventions. His theories ultimately found full acceptance and were profusely acclaimed only decades after his death.

Lev Vygotsky married Roza Smekhova in the early 1920s. The couple was blessed with two daughters. He breathed his last on June 11, 1934, at the young age of 37 in Moscow, Russia after suffering from his recurrent tuberculosis.