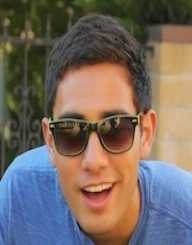 A majority of people seem to fall out of place between following their passion or money. Of course, a note is sweeter; but passion is more satisfying and delightful. Zach King opted to follow his passion and its nothing else than his 6second tricks and magical twists on social media. To date, he is defined as the King of the Vine. He is quite active on social media especially his YouTube channel named ZachCutKing. It is here that he posts his videos and challenging tutorials in regards to filmmaking. I don’t know, but his videos seem to have a glowing effect that earns him tons of fans. It is a talent and innate passion that has taken him to travel the world and beyond. Further, he was acknowledged with an award called Hewlett-Packard as well as receiving massive of interviews.

Zach King and his wife, Rachel Holm competed in an American TV Show called The Amazing Race. With over 1.2 million followers on his YouTube account couple up with over five million on his Vine app., the sky is his limit. His Instagram account has over sixteen million followers and supporters. He also seems to rule the world of Twitter and Facebook. It was in 2013 that Zach was selected as the 25th Most Promising Filmmakers. His thirst for greatness earned him an excellent reputation in Hollywood films. I have got nothing else to say but to believe that Zach’s dream is turning into reality day by day. Read on.

Zach King was first seen in the world on February, 4th 1990 in Portland, United States. His father is a Chinese-American while his mother is an American descent. Zach loves to spend time with his family and his two younger sisters. As three siblings of an American woman, she opted to homeschool her children to the latter. The family loves pets to the core, and no obstacle seems to hinder them from having a dog called Lucy and a goldfish.

At seven years of age, Zach’s filming talent began where he started to take home videos with his camera. At 14 years old Zach opted to upgrade his skill where he bought a Mac Computer and modern cameras. It was there that he started to take professional videos as well as editing them.

Afterward, Zach’s family opted to live on a farm. It was there that their parents traveled to China where they chose to adopt a girl child called Katie. King first went to High School, and later he enrolled at Biola University. On December 2012 he graduated with a B.A in Cinema and Media Arts.

While at the University, Zach met a music video director known by his moniker VFX Bro. The two lived together, and their friendship brought further profitable deals. They started to post trending videos on their social media channels. It was here that huge fan base began to follow them like a plague. In the process, King opted to start free film training on his social accounts. As time passed, he began to make money out of it.It was the same money that he used to launch seminars as well as education fees.

Jedi Kittens, Jedi Kittens with Force and Jedi Kittens Strike Back YouTube videos welcomed Zach King into the world of fame. Also, the sequels had over 46 million views. It was in 2013 that Zach joined Vine where he began to upload creative and out of world videos. Subsequently, fortune and affluence became his next of kin. He started to post humorous videos daily which led him to be invited on Ellen DeGeneres Show. In 2013 he was offered a chance to work in a film called The Last Word. He also played Zootopia in a Disney movie called Muzzled Wolf.


Is Zach King A Star?

Zach King is often regarded as a calm and collected kind of guy. But people don’t know his other side of the story. Zach is a hardworking man who thirsts for nothing else than greatness. With all the fame and success, sleepless nights and ardor allow him to cross the line of quality and perfection. Since inception, he dreamt of becoming a filmmaker, and his thoughts have given birth to not one but multiple traits. Allow me to define him as a visionary man.

Beyond his fame, Zach loves to spend some time with his family and close friends. He currently resides in Los Angeles with his loving wife, Rachel Holm. The couple has been married for two years. At times he takes the time to learn new video making tutorial as well creating new special effects. Aside from that, he is a trained pianist and still loves his mother’s food. Other than filmmaking and video captioning, Zach seems to have lots in store for us. He has got nothing else to say but just to watch this space.

Zach King’s talent and top-notch skills have earned him countable of recognition and scholarships. Some of the notable ones include the First Place London Film Festival Award, Critic’s Choice Award, and London Film Festival recognition. In 2013 and 2014 Zach King garnered Vidcon Golden Poop Award as well as winning YouTube’s Next up Creators Contest.