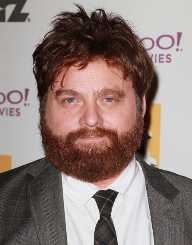 Zach Galifianakis is an outstanding comedian and actor well known for his performances in ‘Comedy Central Presents’ special. Additionally, he is best known for starring roles in films such as ‘The Hangover Trilogy,' ‘Masterminds’ and his voice role in ‘The Lego Batman Movie.’ Currently, he hosts an award-winning talk show, ‘Between Two Ferns with Zach Galifianakis’ and produces a comedy series, ‘Baskets’ which he also plays the leading role.

Zach Galifianakis is the son of Harry and Mary Frances born on October 1, 1969, in Wilkesboro, North Carolina. He attended Wilkes Central High School followed by North Carolina University where he studied communication although he did not graduate.

Zach Galifianakis started his career by guest starring in a television film, ‘Boston Common’ followed by his two-week job as a writer on ‘Saturday Night Live.’ Later, he co-starred in ‘Out Cold’ followed by small roles in films such as, ‘Corky Romano,' ‘Into the Wild,' ‘Bellow Bubble Boy,' ‘Super High Me’ and ‘Heartbreakers.’

In 2001, he played in one episode of, ‘Comedy Central Presents’ that entailed a stand-up routine role and a section he played the piano. His comic performance concluded with a song, ‘Eternal Flame’ by The Bangles.

Zach Galifianakis started hosting his show in 2002 called, ‘Late World with Zach’ on a VH1 talk show. This show featured performances his friends and regular performers such as Jon Brion and Rhett Miller. During the same period, he played in a drama series titled, ‘Tru Calling’, made several appearances on ‘Jimmy Kimmel Live!’ and four episodes of ‘Reno 911!’

Later, he performed as Alan Finger in a comedy show, ‘Dog Bites Man’ followed by a guest appearance role as Fred, the homeless guy in, ‘The Sarah Silverman Program.' Also, he had a recurring role as a doctor in the animated show, ‘Tom Goes to the Mayor’ followed by several appearances in episodes of, ‘Tim and Eric Awesome Show, Great Job!’ as Tairy Greene.

In 2006, Zach Galifianakis made an appearance in Fiona Apple’s music video for the song, ‘Not about Love’ followed by an appearance in Kanye West’s song, ‘Can’t Tell Me Nothing’ in 2007. On June 2006, he released his comic rap/ hip-hop/ dance single titled, ‘Come On and Get it’ (Up in ‘Dem Guts) which featured Apple’s vocals.

Additionally, he made a periodic comedy tour with a group of comedians named, 'Comedians of Comedy' who performed at live recluse to reach different types of audiences. Their performances were tapped and featured on Comedy Central, and a full-length movie showed on Showtime at SXSW.

Zach Galifianakis has a series of videos titled, ‘Between Two Ferns With Zach Galifianakis’ on Funny or Die website, which he conducted interviews with celebrities such as President Barack Obama, Jennifer Aniston, Bruce Willis among others. His interviews contained bizarre questions sometimes with awkward sexual comments and questions.
Later on, in 2010, he played in the hit comedy, ‘The Hangover’ followed by support roles in films such as, ‘G-Force’ and ‘Up in the Air. ‘He also starred in ‘Bored to Death’ ‘Dinner for Schmucks’ ‘It’s Funny Story’ and ‘Due Date.’ On March 6, he hosted ‘Saturday Night Live’ during the shows 35th season.

In 2011, Zach Galifianakis resumed his role in, ‘The Hangover Part II’ and starred alongside Wil Ferrel in a political comedy titled, ‘The Campaign’ in 2012. Galifianakis performed in ‘Birdman or (The Unexpected Virtue of Ignorance), a film that received critical acclaim in 2014. In 2017, he played a voice role for 'The Joker' in The Lego Batman Movie.

Zach Galifianakis received a Primetime Emmy Award as a producer of the show at 66th Primetime Creative Arts Emmy Awards. This award came about as result of his outstanding performance in a Short-Format Live-Action Entertainment Program.

Zach Galifianakis married Quinn Lundberg in August 2012, and the couple has two children. He owns a farm in Alleghany County in Northeastern Carolina where he goes to take a break from work.