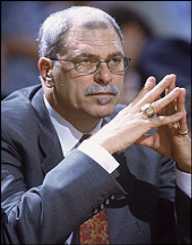 Phil Jackson is known in basketball more for his years as head coach of major NBA teams than his years as a player. His Zen approach to coaching is just one of the reasons why he has been called one of the greatest coaches in the history of the sport.

Phil Jackson was born in Deer Lodge, Montana on September 17, 1945. His parents did not believe in entertainment including dancing or television. Jackson did, however, participate in a lot of sports.

In high school, Phil Jackson was involved in varsity sports like football, baseball, and track and field as well as basketball.

After high school, Phil Jackson attended the University of North Dakota. He played college basketball from 1964 to 1967.

Phil Jackson started his career as a professional basketball player after college. He was a second-round draft pick for the New York Knicks. He was an NBA All-Rookie First Team selection in 1968.

While Phil Jackson played for the Knicks, he and his team won the NBA Championships in 1970 and 1973. In 1979 and 1980, he played for the New Jersey Nets. After those years, he retired as a professional player.

Upon his retirement, he followed a path toward coaching. It wasn't until 1987 when he returned to the NBA as the assistant coach of the Chicago Bulls.

Phil Jackson was promoted to head coach two years later. Under his leadership, the team won six championships during his nine years there.

In 1999, Phil Jackson was signed on as the head coach of the Los Angeles Lakers. They won three championships before he retired in 2004.  Because of their poor performance, they rehired him again.

After that, the Lakers won two more titles. Phil Jackson officially retired from coaching in 2011.

Phil Jackson earned the nickname “Zen Master” because he used eastern philosophy when he coached his teams. His motivational techniques allowed them to channel the power of the mind when they faced fierce competition.

Head coach for 11 NBA championship teams including the Chicago Bulls and LA Lakers, NBA Coach of the Year Award, 1996

After his success as a coach, Phil Jackson went on to write his memoirs. In his books, he shares his experience as a player and a coach. He also pointed out what made him a success in the world of basketball.

In 2011, Phil Jackson was diagnosed with prostate cancer. He opted for surgery after the playoffs.

Phil Jackson may have retired from basketball as a player and coach, but in 2014 he became president of his former team. Since that time, Jackson has been in charge of the New York Knicks on an executive level.

Named one of the ten greatest NBA coaches of all time, 1996

Basketball Hall of Fame as coach