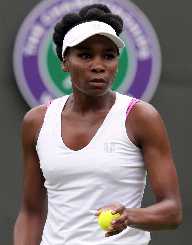 Venus Williams’s love for sports first began when she was still a child. Both Venus and her sister Serena began to train under Rick Macci, who helped to hone the girl’s tennis skills. Venus Williams remained in training until she was a teenager. Once her training was up with Macci, her father continued to train her and Serena. As her professional career began, her father continued to be her coach.

Venus Williams official tennis career began when she was only 14 years old. She lost her first game, but this didn’t discourage her from continuing to play. Throughout the early 1990’s, she continued to play in competitions. In the beginning, she lost more matches than she won, but this only encouraged her to continue practicing to improve her skill.

In the late 1990’s, William’s skill grew. She placed well in the Tier I tennis tournaments. It was in the same year that she participated in the Grand Slam competition. , the US Open, and the IGA Tennis Classic. It was in 1997 that Venus Williams won her first singles title match at the IGA Tennis Classic in Oklahoma City. For the remainder of the 1990’s, Williams continued to do well in many competitions, reaching higher ranks in competitions, but she did not win many more titles.

It was in the early 2000’s that Venus Williams began to shine in the sport. In this year, she won dozens of matches. Along with Serena Williams, she even won the doubles match at Wimbledon. By the end of this year, she was ranked in the top ten women’s tennis players. For the next few years, Venus continued to play singles matches, and doubles matches with her sister. Alone and together, Venus Williams and her sister won several titles during this time.

In 2002, Venus Williams reached one of her highest career points: she became the number one ranked female tennis player. She kept this ranking for about a month. She was later replaced as number one by Serena Williams. Even though she was defeated by her sister in singles matches, she and Serena still continued to play in doubles matches together, winning many of their matches and earning several titles as well.

In 2003, Venus Williams suffered an injury. She continued to play tennis, but her injuries set her back. Before her injuries, she was at the peak of her career, but she struggled to earn the same results as she had in the past. It wasn’t until 2007 that she was healed from her injury and her skills returned to normal.

After 2007, Venus Williams singles matches and doubles (still playing with Serena Williams). By 2009, she was back in the top five rankings of women tennis players. By 2010, she was the number two women’s tennis player. However, later in the same year, she suffered further from a knee injury, which set back her game once again. By the next year, her rank had dropped below the top 100. Her injuries and some illness prevented her from appearing in several matches. One of the only parts of her career that were not severely damaged was her doubles matches with her sister.

In 2012, Venus Williams and her sister returned to the Olympics, in London, England. Once again, she and Serena won the doubles gold medal. In 2016, the sisters once again entered the Olympics, in Rio. Sadly, the sisters lost in the first round of the competitions. Williams later entered in the mixed doubles competition with Rajeev Ram, but the team lost in the finals to Jack Sock and Bethanie Mattek-Sands.

Outsides of tennis, Venus Williams has several business ventures in the works. She has her own interior design company called V*Starr Interiors, as well as her own clothing line, EleVen.

In 2010, Venus Williams, published a book along with Kelly Carter and Abby Craden called Come To Win: Business Leaders, Artists, Doctors, and Other Visionaries on How Sports Can Help You Top Your Profession.

Venus Williams has also co-authored several books with her sister, Serena. Some of their books include the following.

Venus and Serena: Serving From The Hip: 10 Rules for Living, Loving, and Winning (also coauthored with Hilary Beard)

Venus Williams has won numerous titles. Listed below are both her singles and doubles titles that she has won over the course of her career.

Venus Williams has also won other awards for her popularity as a tennis player. These awards are also listed below.