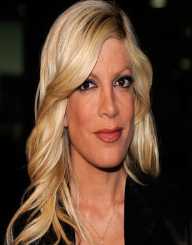 American actress Tori Spelling was born Victoria Davey Spelling on the 16 May 1973 in Los Angeles, California. She is the daughter of television producer Aaron Spelling and Candy Marer.

Initially, Tori Spelling was a pupil at  Beverly Hills High School but changed schools and graduated from Harvard-Westlake School in 1990.

Tori Spelling started out as a child actor when guest starred in The Love Boat, T.J. Hooker, Hotel, Fantasy Island, Vega$ and Saved by the Bell.

Then in 1990, she was in the successful television series Beverly Hills, 90210 which ran for ten seasons. Her father was a co-producer of the show.

In 1997 Tori Spelling appeared in the film The House of Yes and 2002 she made her stage debut in Maybe Baby, It’s You. She then appeared in a sitcom So NoTORious (2006) as herself.

A reality series Tori & Dean Inn Love followed in 2007. In 2009 she had two guest appearances in 90210, a revival of Beverly Hills, 90210. She was also in the films A Friend to Die For, Mother, May I Sleep with Danger? and appeared in TV films Family Plan, Hush, and A Christmas Carol.

Tori Spelling released an autobiography STori TELLING (2008). In 2009 Mommywood, a book on parenting was published and her third book uncharted territory in 2010.

In 1991, Tori Spelling was awarded the Young Artist’s Best Young Actress Guest Starring in a Television Series Award for her acting in Saved by the Bell.

Her autobiography sTORI Telling was named the best celebrity autobiography of 2009. The book also debuted on top of the New York Times Best Seller list. 2013 Her fourth book, Spelling It Like It Is was published in 2013.

Tori Spelling was married to Charlie Shanian (m.2004-div.2006). The same year after her divorce she married Dean McDermott.

The couple has five children. When her father, Aaron Spelling, died in 2006, the bulk of his $US500 million estate went to his wife Candy Spelling with his two children each receiving #800,000 after taxes.