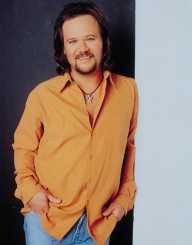 Travis Tritt is a country singer and songwriter.

James Travis Tritt was born on February 9, 1963 in Marietta, Georgia. His parents are James and Gwen Tritt, and he has a younger sister name Sheila. When he was four, he joined children’s choir at the First Assembly Church of God in Marietta. Travis got a guitar when he was eight, and taught himself how to play it.

But Travis Tritt did not learn how to read music. At fourteen, he was trying to write his own songs, he dreamed of becoming a country singer. That year, his parents got him another guitar, and he learned from his uncle, Sam Lockhart.

Before graduating school, Travis Tritt worked at a furniture store, and a supermarket clerk to help supplement income. He eventually worked in an air conditioning company after graduation.

Travis Tritt attended the Sprayberry High School but did not continue to college.

Travis Tritt worked at an air conditioning company while playing in clubs, but gave up the air conditioning job after his divorce. Travis played small gigs solo at clubs around Atlanta. In 1984, Travis approached Danny Davenport, a talent scout for Warner Brothers Records.

In 1989 Travis Tritt’s first single was released: Country Club broke into the Country Top 10, peaking at number nine. The second single "Help Me Hold On" became his first number one single in 1990, allowing him to release a full album as per contract with Warner Bros. Country Club album was released in 1990, was certified platinum by July 1991, and got a double-platinum in 1996.

The success of his album attributes to his ability to incorporate rhythm and blues and southern rock with mainstream country, allowing him to walk a line between country and rock. His unique presentation of Country songs made him a hit for Country Fans.

It's All about to Change was released in 1991, his second album which contains “Here’s a Quarter”. He wrote that song after his second divorce, along a duet with Marty Stuart, “The Whiskey Ain’t Workin” His second album also reached platinum..T-R-O-U-B-L-E in 1992 also reached platinum, making Travis the youngest member of Nashville's famed Grand Ole Opry. After his success in Country Style music, Travis Tritt experimented with other musical genres.

In 2007, Travis and Randy Jackson from American Idol released The Storm via Category 5 Records. The album featured a medley of R&B, soul and blues-infused. Travis Tritt later filed a $10 million lawsuit against Category 5, for failing to pay royalties, and failed to give him creative control on The Storm.

Travis Tritt released a new album, The Calm After, via his own Post Oak label in July 2013, after acquiring rights to his own songs from the Storm. He reissued the songs under the new album.

Travis Tritt appeared in Rio Diablo with Kenny Rogers and Naomi Judd, a television western in 1993. He also acted in The Cowboy Way in 1994, he also wrote the theme song for the show. Travis also appeared with a few television shows, such as CBS's Yes, Dear; Touched by an Angel; and Dr. Quinn: Medicine Woman and many more.

Some of Travis Tritt's awards were the 1990 Billboard Top Male Artist, the Country Music Association Vocal Event of the Year 1992 - "This One's Gonna Hurt You" and the Grammy Awards - Best Country Collaboration with Vocals 1992 - "The Whiskey Ain't Workin'"

Travis Tritt married his high school sweetheart, Karen Ryon in September 1982, and stayed together for two years. When the divorced, he was ordered to pay alimony to Karen for six months.Travis later married Jodi Barnett, a bartender, when he was 21, she was twelve years older. They were divorced shortly after he signed with Warner Bros. in 1989.

In April 1997, Travis married Theresa Nelson from Nashville. They have two sons: Tristan and Tarian, and one daughter Tyler.

Travis Tritt is a member of the Republican Party, supporting George W. Bush for President in 2000. He is believes that the answer to crime is criminal control, as he is pro-gun and pro-death penalty, he wants tougher punishments for criminals. He is also in support for Second Amendment.