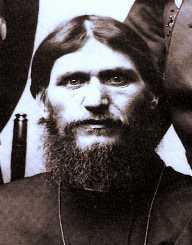 Grigori Rasputin was a Russian religious wanderer and faith healer who is best known for his relationship with the Romanov dynasty in Russia.

Grigori Rasputin was born on 9 January 1869 in the small village of Pokrovskoye in Western Siberia. His father, Yefim Yakovlevich Rasputin, was a well-off peasant and worked as a coachman. The parish register lists Grigori as the fifth of his parent’s nine children, a lack of records of the others suggest he was the only child that survived infancy. It is unlikely that Rasputin attended school as nearly 90% of Siberia’s population was illiterate. Rasputin was well known in his village as a violent individual who was forever getting involved in fights and as a womaniser. However, after the death of one of his children Rasputin went to a monastery and became a religious convert. He gave up alcohol and tobacco and would fast and pray at length.

Following his newfound religious zealotry, Rasputin began working as wandering preacher. He began travelling around Russia visiting monasteries and churches. He would return home at harvest time to help his family. He began to garner a reputation in Russian as a theologian and often debated with church leaders. Rasputin also came to be known by members of the Russian aristocracy and in 1905 he was introduced to the Tsar and Tsarina.


Work with the Royal Family

Russia was in flux at this time and was extremely backward in comparison to other European nations. The Tsar had only recently allowed a parliament to be formed but still claimed to be an absolute monarch. There had been severe violence, rioting, strikes, and revolution. It was after a socialist bomb attack that Grigori Rasputin was summoned to the Imperial Palace to pray. In 1907, he was called to care for the heir to the Russian throne Alexei. The young prince suffered from haemophilia and was prone to bouts of bleeding after even small injuries. Rasputin was able to calm the child and this convinced the Tsarina Alexandra that he had special healing powers.

The Russian nobility at the time often made use of occultists and faith healers but many within the court still resented Rasputin’s presence. By 1910 there was open hostility to him in both the press and amongst the nobility. Various politicians and nobles attempted to convince the Tsar to exile Rasputin at this time. The Tsar refused but did send Rasputin off on a pilgrimage. By 1913 the Duma (Russian Parliament) was openly debating Rasputin’s position and in response the Tsar sacked a number of ministers. Rumours circulated that Rasputin and the Tsarina were romantically involved.

In July 1914 while visiting his hometown, Grigori Rasputin survived an assassination attempt. He was stabbed in the stomach but managed to fight off his attacker with a stick. 1915 saw the Russian secret police join the conspiracy against Rasputin. A number of detectives would shadow him and false accounts of his behaviour were fed to the Tsar. Rasputin preached a peaceful foreign policy to the Tsar during the Second Balkan War, and during the July Crisis before the outbreak of World War I., This put him at odds with the hawks and Panslavists within the Russian ruling class.

Rasputin warned that war would mean the collapse of Russia and the destruction of the monarchy. German declaration of war made peace impossible and Russia was plunged into war. Almost immediately disaster struck with a series of military defeats as the Russian military was woefully under-resourced. There was also widespread food shortages. The public began blaming the catastrophes on the German Tsarina, and the Tsar attempted to lift morale by taking direct control of the war, but his military incompetence worsened matters.

Grigori Rasputin became a vital confidant of the Tsarina and as such had significant influence over the Tsar and the war. By 1916 members of the Royal Family and the Duma were plotting to murder Rasputin. Rasputin and the Tsarina began purging ministers from government. By 1916 the government had all but collapsed and the Russian Army had been driven from Poland.

The leader of the assassins was Prince Felix Yusupov; he had previously sought Rasputin’s help with a health issue and invited him to his apartment in the Moika Palace. According to Yusupov they first fed Grigori Rasputin poisoned cake and tea, but this failed to kill him. After a few hours of drinking Yusopov drew a pistol and shot Rasputin in the chest. The shots were not fatal, and Rasputin attempted to escape. He was gunned down in the courtyard of the palace. The assassins took his body and dumped it in the Malaya Nevka River. However, they failed to attach weights to his body, and it washed up on the banks of the river two days later.

Yusupov was sent into exile for the murder, and no trial was ever conducted. Rasputin was buried in a ceremony attended by the Tsar, Tsarina and their children on 21 December 1916. Under the Gregorian Calendar, the date of Rasputin’s death was the 30th of December; Imperial Russia still maintained the Julian Calendar, so his death was recorded as the 17 December. Many different stories have emerged about his murder with some disputing whether he was poisoned and another claiming he survived the gunshots and in fact drowned when thrown in the river.

Grigori Rasputin married Praskovia Fyodorovna Dubrovina on 2 February 1887, and the pair had six children although only three, Dmitri, Matryona, and Varvara survived infancy. Following his religious conversion, Rasputin became very strict with his children forcing them to join in his fasts and long prayer.

Rasputin has been depicted in many films about his life or the Russian Revolution, the most famous being Rasputin the Mad Monk in which Christopher Lee plays him. The German pop group Boney M had in 1978 with ‘Rasputin’ which describes the more lurid rumours that surrounded his life and death.