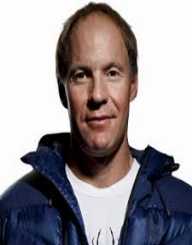 Tommy Moe is an American skier. He majored on Super G and downhill events. He became the first American to win both gold and silver medals in skiing events.

Tommy Moe was born in Missoula, Montana on 17th February 1970. Moe grew up seeing his father Tom Sr., skiing since he was a member of the ski patrols. He started emulating his father when he was only 3.

At 13, Moe got an endorsement deal from Dynastar Skis, because of his excellent display despite his young age. He was however hit by a setback when was barred from competing in any sporting event for smoking marijuana in public.

With the help of his father, Tommy Moe got back to the game matured and more focused. He later joined Glacier creek Ski Academy, where he his skills improved significantly. At the age of 16, Moe joined the National Ski Team.

In 1987 junior competition, held in Norway, Moe finished second to win a silver medal. His first gold came in 1989 in the combined events and the Super G a competition held in Alaska.

In 1989, Tommy Moe made his World Cup debut in a World Championship held in Colorado where he finished in 12th.

After several failed attempts to emulate his junior level standards, Moe raced to take home a gold medal in Winter Olympic Games held in Norway in 1994. Four days later Moe celebrated his birthday with a silver medal after finishing second.

He took his form to the World Cup after he won his gold in Whistler.

Tommy Moe's winning streak was interrupted after he tore his ligament in 1995. This forced him to stay out of the 1997 world cup competition. After his recovery, he never regained his form missing several tournaments and failing to get past qualifies. He was hit by another setback in early 1997; he got a thumb injury which required surgery.

His full return to the competition came in 1998 where he won the Alpine Championship. He later made the U.S Olympic team and finished 8th in super G and 12th the downhill competition. He announced his retirement after the Olympics at the age of 28.

In 2003, Tommy Moe married Megan Gerety, his long-term girlfriend who was also a member of the U.S Ski national team. The two have two daughters together.

After his retirement, Tommy Moe ventured into business. He also engages in his hobbies such as biking and fishing. He was inducted into the U.S. Ski & Snowboard Hall of Fame and Museum. He was also Jackson Hole Resort guide and ambassador.