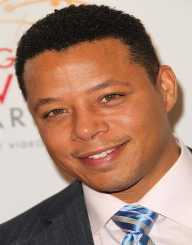 Terrence Howard was born on March 11th, 1969. He is famous for being an American actor. Likewise, Howard has also earned high acclaim for his talent in singing. In the film industry, Howard rose to fame after featuring in Hustle & Flow.

Owing to his exceptional acting skills, he earned himself an Academy Award nomination for best actor.

After that, he has featured in different films that have also boosted his acting career including Crash, Gets Rich or Dies Tryin’, August Rush, Prisoners, and The Brave One.

Terrence Dashon Howard was born on March 11th, in 1969. His place of birth was in Chicago, Illinois. He was the son of Anita and Tyrone Howard.

Young Howard was the great-grandson of Minnie Gentry; a famous stage actress back in the day. Howard’s parents were biracial as they were both of Anglo and African descent. Growing up, he went through a rather harsh experience as his father was abusive.

At the age of two, he saw his father stabbing another man after which he was jailed for eleven months. After that, his parents divorced leaving Terrence Howard to be raised by his great-grandmother.

Terrence Howard enrolled in Pratt Institute situated in Brooklyn New York. Here, he pursued chemical engineering. However, he only dropped out after two years of schooling to concentrate on acting.

At the time, he had landed himself a few acting roles such as The Cosby Show where he acted alongside Bill Cosby.

With time, Terrence Howard began taking on some television roles such as The Jacksons: An American Dream (1992), Family Matters (1994) and Picket Fences (1994).

Terrence Howard’s career took a different turn immediately he chose to try out the film industry. It did not take time before he landed himself the dominant role in 1995. He featured in Mr. Holland Opusand's, Dead Presidents during this year.

Four years later, Terrence Howard was awarded for this exceptional performance in the 1999 film dubbed The Best Man. Soon, other significant roles followed in movies such as Big Momma's House -2000, Angel Eyes – 2001, Biker Boys -2003 and Ray – 2004.

Shortly after, Howard featured in Crash-2004. This film bagged home an Academy Award for best picture. Similarly, Howard was also bestowed with a National Board of Review Award for his brilliant performance.

Terrence Howard continued enjoying his career success in the film industry the following year with the release of Hustle & Flow -2005. In this film, he starred alongside the likes of Taraji Henson and Ludacris.

The film brought him nominations in some awards such as the Golden Globe, Oscar, and the Screen Actors Guild.

Terrence Howard diversified his career and took on some roles both on TV and in the film industry. In July 30th, 2010, he was part of the main cast in Law & Order.

The following year, he starred in the film titled Winnie Mandela where he played the role of Nelson Mandela. In 2015, Howard starred in the hit show dubbed Empire. In the same year, he also cast in Wayward Pines; a Fox Series TV show that was aired for only one season.

In as much as Terrence Howard has been successful in his career, he has not been fortunate in his marriage life. He has wedded four times. Out of these marriages, he has been blessed with five kids. He is also a grandfather of two.

Terrence Howard tied the knot with Lori McCommas in 1994. Together, the two were blessed with three children. Nonetheless, the two went separate ways in 2000. They, however, wedded each other again in 2005.

This did not last as they divorced each other again after only a year. Later, he married Michelle Ghent before marrying Mira Pak as his third wife.