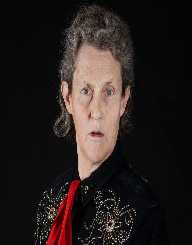 Temple Grandin is an author and an animal science professor, who has defeated the difficulties of autism and has enjoyed a very successful career in science. She is also the creator of the hug-box, a device that helps children with autistic problems calm down.

She has extensively written on animal welfare including two hugely successful books – Animals in Translation, And Animals Make Us Human. Temple Grandin is an advocate of educating autistic children, and rather than eliminating autism; she suggests training the children to make use of their special abilities.

Temple Grandin was born to Richard Grandin and Eustacia Cutler on August 29, 1947. Her birthplace is Boston, Massachusetts. She was found to suffer from autism by age 2. Her parents consulted several doctors, but she began speaking only after she was four years old.

She had great difficulty in her early school years, often getting bullied due to her speaking disabilities. With her mother’s support, she slowly continued to learn and developed a sharp brain.

Despite her autism, Temple Grandin succeeded in having an amazing track record in education. She passed high school from Hampshire Country School and then went to study Psychology at the Franklin Pierce College in 1970. She obtained her Master’s degree from Arizona State University, in Animal Science. Finally, she earned her doctoral degree from the University of Illinois, Urbana-Champaign.

GrandinTemple Grandin began her career as a consultant to meat producing companies. Her work focused on improving the quality of their cattle.

Her work on animal care is not based on prolonging the life of an animal. Instead, she focuses on the removal of anxiety so that the animals can live happily. Her trouble with speaking did not stop her from becoming a good writer. Her books on the subject of animal welfare – Animals in Translation and Animals Make Us Human have been critically acclaimed.

Temple Grandin is also a strong advocate of the education of autistic children. She has featured in a 1995 book, An Anthropologist on Mars, which highlights how awkward she feels in social situations. She contributes her ability to think in pictures of her autism, which has made her so successful in her career. Throughout her career as an educator, she has been an advocate of teaching autistic children how to use their abilities.

Temple Grandin was made a Fellow of American Society of Agricultural and Biological Engineers in 2009. In 2010, a film Temple Grandin, based on her life, earned 15 award nominations. The actress Claire Danes, who portrayed Grandin, went on to win a Golden Globe for her performance.

Temple Grandin openly accepts being awkward in social situations, saying emotions don’t appeal to her much. She recognizes the influence of autism in her life and dedicates her success to it. Due to her autism, she is extremely sensitive to noise and other stimuli.

Temple Grandin is unmarried and has no children. She is agnostic towards religion.