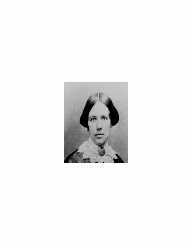 Maria Mitchell was born on 1st August 1818, to William and Lydia Coleman Mitchell. Her parents were Quakers, and as part of a large family, Maria Mitchell had nine brothers and sisters. She was also distantly related to Benjamin Franklin. The Quakers believed in female equality, and the girls all received very good educations because of this. It was Maria Mitchell ’s father that recognized her early fascination with the stars, and he encouraged her to continue and taught her how to use a telescope.

Maria Mitchell attended a small local primary school called Elizabeth Gardener’s. She went from there to North Grammar School, which is where her father was the principal. Her father went on to build his own school, so Maria then moved to his school, where she became a teaching assistant as well as a student.

When her father’s school closed, she then went on to attend Cyrus Peirce’s School for Young Ladies. Peirce was a Unitarian minister.

In 1835, Maria Mitchell opened her own school and allowed non-white students to attend. This was controversial at the time, as other schools in the area were still segregated. In 1836, Maria became the first librarian at the Nantucket Atheneum Library. She held the position until 1856. Right through this period, she continued her sky gazing, studying Jupiter, Saturn, and solar eclipses.

Maria Mitchell worked for a period in the U.S. Nautical Almanac Office, where she calculated tables showing the positions of Venus. She then went on in 1865, to become a professor of astronomy at Vassar College. Maria Mitchell remained a teacher at the college until 1888.

Maria Mitchell was recognized as the first professional female astronomer in the United States.

Maria Mitchell never married. She remained close to her family over the years, even though she moved away from the Quaker religion, and when her mother died, she moved back home to look after her father.

The association runs two observatories and a natural science museum, as well as preserving the birthplace of Maria. They offer a variety of programs throughout the year for people of all ages, in relation to the history of Mitchell.

As well as her astronomical work, Maria Mitchell was an activist for the advancement of women and worked tirelessly for the cause. She also worked for race equality and stopped wearing cotton in protest of slavery. She was a woman well ahead of her times.

With notable ground-breaking “firsts’ for women, Maria Mitchell 's legacy will continue through her foundation and other areas.