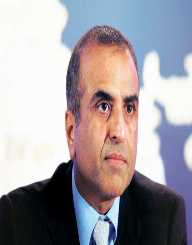 Sunil Bharti Mittal was born on October 23, 1957, in Punjab, India. His father Sat Paul Mittal was a member of the Parliament, Indian National Congress. He was elected from Punjab for two terms- in 1976 and 1982.

Sunil Bharti Mittal attended the Wynberg Allen School in Mussoorie and later attended the Scindia School at Gwalior. In 1976, Mittal graduated from Punjab University, Chandigarh, with a Bachelor of Arts and Science degree. He suffered a personal loss in 1992 when his father died of a heart attack.

Sunil Bharti Mittal started his business in 1976 when he was just 18 years old. He had borrowed $300 from his father and began making crankshafts for the local bicycle manufacturers. His first business was quite successful, allowing him to work on other ventures in the future. In 1980, Mittal along with his brothers Rakesh and Rajan started an import enterprise. The Bharti Overseas Trading Company sold bicycle parts and yarn factories. In 1981, he moved to Mumbai and purchased importing licenses from exporting companies in Punjab. With this, he began importing portable electric-power generators of Suzuki Motors from Japan. However, the importing of generators was banned by the Indian government.

Sunil Bharti Mittal quickly recovered from the sudden ban and changed the direction of his company. He began assembling push-button phones in India, which he used to import from Taiwan. He began replacing the old-fashioned rotary phones with the newer button phones. His company Bharti Telecom Limited was then incorporated and made technical ties with Siemens AG in Germany. His business grew rapidly, and Mittal began making fax machines, cordless phones, and other telecommunication gear. His first push-button phones were named “Mitbrau.”

In 1992, an auction of the mobile phone licenses in India was taking place. Sunil Bharti Mittal and his company bid for one of the four licenses and won. Since the conditions for a license received asked for the bidders to have some experience with telecom operations, Mittal’s company made a deal with the French telecommunications company Vivendi. Mittal became one of the first entrepreneurs in India to notice the major potential of the mobile telephone business. Mittal’s company launched its services in 1995 when Bharti Cellular Limited formed a new brand AirTel. The company became the first telecom company to reach 2-million mobile subscriber mark.

In 2008, Sunil Bharti Mittal was considering to invest $45 billion in buying 100% of the South Africa based MTN Group telecommunications company, which covered 21 countries in Africa and the Middle East. However, the deal fell apart, since MTN Group tried to make Mittal almost a subsidiary of the new company. The companies agreed to continue the discussion in 2009, but they ended with no agreement. In 2010, Mittal acquired the African company Zain Telecom for $10.7 million. This became the largest ever international acquisition by Indian telecom firm. Two years later, Mittal made a deal with the U.S. retail giant Wal-Mart and started several retail stores across India.

During his life, Sunil Bharti Mittal has received several awards and honors. In 2006, he was named the Asia Businessman of the year by Fortune Magazine. He has also received the Best Asian Telecom CEO, Best C.E.O. India award in 2006, and Business Leader of The Year award in 2005. Mittal holds Honoris Causa Doctorate of Sciences Degree from Amity University Gurgaon.

Sunil Bharti Mittal is also the Chairman of the International Chamber of Commerce and a member of the Telecom Board of International Telecommunication Union. In ITU, he is also the commissioner for Broadband Commission for Sustainable Digital Development. Mittal founded the Bharti Foundation, a philanthropic arm of the Bharti Group. The Foundation has done major charitable works in India, building over 254 schools in Indian villages and offers free education, books and mid-day meals to poor children.