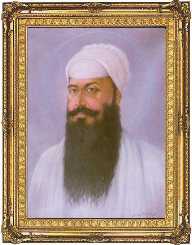 Guru Angad was the famous second Sikh Guru born on 31st March 1504 AD in Sri Muktsar Sahib. He had been a zealous follower of Guru Nanak and always aspired to follow in his footsteps. Guru Nanak endorsed him as his only devout follower who would take after his steps in the event of his death. His spiritual life was a no match to the many Sikh Gurus of his time, and Guru Angad had attained a deeper understanding of his religion. He was a benevolent person and always took care of the less fortunate both far and near. He died on 29th March 1552 AD in Amritsar at the age of 47.

Guru Angad was born on 31st March 1504 to Pheru Mal and Mato Ramo in Sri Muktsar, Sahib, India. His family was among the wealthiest in India at the time of his birth. His father worked as an ardent trader who made ends meet for Lehna which was Angad’s original name and his mother. He and his family relocated to Khadur where he grew up. He was a zealous young boy who was so passionate about God and spiritual things. His enthusiasm made him become a follower of the goddess Durga at a young age. He loved reading holy scripts and listening to Guru Nanak’s recitals.

Guru Angad had also become a leader who assembled people to go up to the shrine of the goddess Durga to pray and give alms. All that he learnt as a boy never escaped his memory and became the foundation of his robust spiritual lifestyle. His encounter with Guru Nanak was a turning point for Guru Angad since he decided to follow the Sikh.

As time went by and lessons were being learnt, Lehna was captivated by Sikh’s Nanak way of leaving. This prompted him to let go of his first religion and beliefs to begin on something new. After attaining lessons from Guru Nanak, Lehna was commissioned to go and preach and enlighten people about Sikhism. He taught his community that which he had learnt from Guru Nanak and helped the poor as well. Sometimes, Lehna would feel he needed to go back to his master, but he had to accomplish his task first. Soon Lehna went back to the temple and ministered to his master for as long as he was still alive. Guru Nanak had occasionally put Lehna to different tests, but with each test, Lehna proved his unwavering allegiance to his master. Unlike Guru Nanak’s sons, Lehna was an obedient, loyal follower who made the Sikh consider him as his successor.

Later on, in 1539 September 7, Lehna was given the name Angad which meant he would be the second Nanak, just a replica of the first. Guru Angad was so patient with his master and served him for seven years before his master moved out of the temple in 1539 September 22.  Guru Angad endorsed the teachings of his master and taught them even more with passion. He never became weary of doing good works and motivating his followers to embrace a simple kind of life just like him and his master.

Guru Angad had a spouse Mata Khivi whom he married in January 1520 and together were blessed with four children. His followers respected and esteemed him highly, and before breathing his last breath, he endorsed Amar Das who was one of his followers to succeed him when he is gone. He passed away on 28th March 1552 in Amritsar being 47 years old.