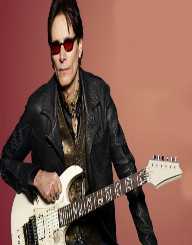 Steven Siro “Steve” Vai was born on June 6, 1960, in Carle Place, New York. He was the fourth son of his parents, John and Theresa. Vai discovered his musical abilities and interest at a very young age. When he was five years old, he started to play piano at his home and learned to play the instrument on his own. The following year, he discovered guitar.

During his childhood, Steve Vai was influenced by the music his parents were listening to. When he was eleven years old, he learned about the contemporary rock and progressive music. When he heard the guitar solo of Led Zeppelin’s Heartbreaker, he decided to begin playing guitar. In 1973, he started taking guitar lessons from Joe Satriani and played in several local bands throughout high school. In 1978, Vai began attending Berklee College of Music in Boston. During this time he began working with Frank Zappa as his transcriptionist. In his fourth semester, Vai moved to California and began his career as a session and touring artist for Zappa. At Berklee, he met his future wife Pia Maiocco, with whom he has two children.

In 1978, Steve Vai got his first job with Frank Zappa as a transcriptionist for his work. After this, he became a full member of Zappa’s band. His first tour with Zappa was in 1980. Vai was later featured in the 1993 album Zappa’s Universe, and in 2006 he appeared as a special guest on Dweezil Zappa’s Zappa Plays Zappa tour. These two projects earned Vai Grammy Award.

In 1983, Vai parted his ways with Zappa and built his first professional studio in his house in Sylmar, Los Angeles. He formed two bands and recorded a large amount of music, releasing his first studio album Flex-Able in 1984. Vai created his own label Akashic Records to release his music.

In 1983, Vai published his composition “The Attitude Song” in Guitar Player magazine. The song was technically difficult and draw a lot of public attention to Vai. In 1986, Vai appeared in the blockbuster film Crossroads as the Devil’s guitar player. He became increasingly popular and in 1985, joined David Lee Roth’s band as the lead guitarist.

The debut album with Roth’s band was Eat ‘Em and smile, released in 1986. The album was a commercial and critical success and peaked at number four on the Billboard 200 chart. The album sold more than 2 million copies and is often seen as one of the greatest rock albums of the 1980s. The next album Skyscraper was also a major success. After finishing the Skyscraper Tour with Roth, Vai parted his ways from the band in 1989. During his time with Roth, Vai designed his famous JEM guitar.

Steve Vai bought out of his contract with Capitol Records and signed with Relativity Records. In 1989, he released his second studio album Passion and Warfare. At the same time, he also played guitar for Whitesnake’s Slip of the Tongue record, where he replaced the injured guitarist. Slip of the Tongue sold more than 3 million copies, and Vai joined the band on their 13-month tour. Passion and Warfare was also a major commercial success and earned Vai numerous awards.

In 1990, Vai formed his band with Devin Townsend as vocal, T.M. Stevens on bass, and Terry Bozzio on drums. In 1993, the band released album Sex & Religion, but after the tour to support the album, the group disbanded. Vai was working on his fourth studio album, but beforehand released his seven-track EP Alien Love Secrets, which he has cited to be one of his favorite records. In 1996, Vai released his studio album Fire Garden through Epic Records.

In 2001, Steve Vai recorded his performance at The Astoria in London and later released the DVD of the concert. This marked first of his many successful live DVD projects. The same year, Vai also released The Secret Jewel Box, featuring unique material from various eras of his career. He also produced and engineered the No Substitutions; Live in Osaka album, which won Vai a Grammy Award for Best Pop Instrumental Album.

In 2005, Vai released Real Illusions: Reflections. This was the first part of an ongoing three-part trilogy concept album. The second part, The Story of Life was released in 2012. In 2010, Vai celebrated the twentieth anniversary of the Ibanez Universal guitar. He introduced the VaiTunes platform to release digital singles. In 2012, Vai released The Story of Light. He embarked on a tour to support the album, with 254 engagements around the world. In 2016, Vai announced the release of an album commemorating the 25th anniversary of Passion and Warfare.

Although Steve Vai is best known as a guitar player, he has also composed and arranged orchestral music. He became known to the public for this in 2004 when the Netherlands Programme Service commissioned Vai. He performed with the Netherlands’ Metropole Orchestra with his project The Aching Hunger. The performance yielded in Visual Sound Theories DVD and two albums: Sound Theories Vol. I & II.

Vai had been composing music since he began studying music theory in high school. His teacher Bill Westcott taught him how to write and compose music. Vai often cites him as his greatest musical influence. To support Sound Theories Vol. I & II, Val formed a band and toured United States, Europe, South America and Australia. In 2010, Vai released his two original symphonies at the Steve Vai Festival in Groningen, the Netherlands.

In 2011, Vai set a Guinness World Record for the largest online guitar lesson. The lesson was held as a promotion for Berklee’s online Steve Vai Guitar Techniques course. He also launched the GuitarTV, dedicated to bringing free guitar-related content to the community. Vai also began working on an intensive guitar camp project “Vai Academy” in 2014.

Steve Vai is married to the former bassist of the band Vixen, Pia Maiocco. Since the late 1990s, he and his family reside in Encino, Los Angeles. The couple has two childer, Julian and Fire Vai. Steve Vai is a vegetarian and has taken up beekeeping as a hobby.