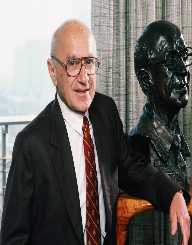 Robert Fogel was an American scientist and economic historian who shared the Nobel Memorial Prize in Economic Sciences with Douglas North in 1993. Born on July 1, 1926, Robert Fogel became known for his advocacy of new economic history (cliometrics), which is the use of qualitative methods in history. Robert Fogel until his death served as the Charles R. Walgreen Distinguished Service Professor of American Institutions and at the University of Chicago’s Booth School of Business as the Director of the Centre for Population Economics.

Robert Fogel was born on July 1, 1926, in New York City to a Ukrainian Jewish immigrant family. Robert Fogel was educated at Stuyvesant High School in 1944. After his graduation, Robert Fogel wanted to pursue a career in science but the doubt about the economy in the second quarter of the 1940s made him choose to study economics. Fogel then enrolled at Cornell University, majoring in history with an economics minor. While there, he was the president of the communist organization, the American Youth for Democracy.

Robert Fogel graduated in 1948. Robert Fogel was more ideologically shifted towards communism, and with that, he went Robert Fogel it professionally and became a professional organizer or the party in after his graduation. This philosophy and ideology, however, waned after eight years, as Fogel saw communism as unscientific. After abandoning communism, Robert Fogel enrolled at Columbia University for his MA in economics in 1960, studying under George Stigler. In 1963, Robert Fogel obtained his PhPh.D.rom the John Hopkins University.

After his masters in economics degree, Robert Fogel worked as an assistant professor at the University of Rochester. He worked there for four years before moving to University of Chicago as an associate professor in 1964. Robert Fogel also became a visiting professor in autumn semesters for Rochester from 1968 to 1975. It was during this time that he collaborated with Stanley Engerman to write Time on the Cross. Robert Fogel also served as a mentor in economic history for several students and researchers including, Deirdre McCloskey at Chicago. Harvard University became his next destination in 1975 and worked there until 1978 when he became a research associateat the National Bureau of Economic Research in Cambridge, Massachusetts. Robert Fogel returned to the University of Chicago as a director of the then created Centre for Population Economics at the Booth School of Business in 1981 where he worked until his death.

Robert Fogel, during his work as an academician, did research and wrote books in the field of economics,  physiology, philosophy of science, sociology, China's economic development, demographics, and nutrition among several others fields.  In 1960, Robert Fogel published The Union Pacific Railroad: A Case in Premature Enterprise, which Robert Fogel followed with Railroads and American Economic Growth: Essays in Econometric History, 1964. In collaboration with Stanley Engerman, they published Time on the Cross: The Economics of American Negro Slavery, 2 volumes, 1974.

His other works includes Which Road to the Past?, 1983, Without Consent or Contract: The Rise and Fall of American Slavery, 2 volumes, 1989, Economic Growth, Population Theory and Physiology: The Bearings of Long-Term Processes on the Making of Economic Policy, 1994, The Slavery Debates, 1952–1990: A Retrospective, The Fourth Great Awakening and the Future of Egalitarianism Chicago, 2000. Others are The Escape from Hunger and Premature Death, 1700–2100: Europe, America, and the Third World, The Changing Body: Health, Nutrition, and Human Development in the Western World since 1700, Explaining Long-Term Trends in Health and Longevity, 2012 among others.

Robert Fogel was awarded the Nobel Memorial Prize in Economic Sciences with Douglass C. North in 1993 for "for having renewed research in economic history by applying economic theory and quantitative methods in order to explain economic and institutional change". Fogel Nobel lecture while receiving the award was titled "Economic growth, population theory, and

Robert Fogel was married to an African American, Cassandra Morgan in 1949. The couple had two children. Their marriage faced lots of challenges due to theanti-miscegenation laws at the time and how the society frown upon interracial marriages. Robert Fogel died on June 11, 2013, at age 86 in Oak Lawn, Illinois.