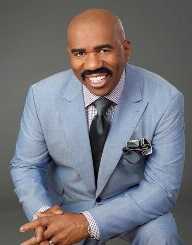 Born on January 17, 1957, Broderick Stephen Harvey is an award-winning American television host and comedian. He also adds as an actor, radio personality, author, and producer. He went through thick and thorns as a young man having to work as a mailman, autoworker, a carpet cleaner and boxer among others before reaching fame. Stephen Harvey host numerous shows including The Steve Harvey Morning Show, Little Big Shots, Steve Harvey’s Funderdomeand  FamilyFeud.

He is also the host of Little Big shots: Forever Young and the Steve talk show. As an author, he has published books like Straight Talk, No Chaser: How to Find and Keep a Man and Act like a Lady, Think Like a Man. The coveted Harvey has won awards like the Daytime Emmy Award, NAACP Image Award, and the Marconi Award.

Broderick Stephen Harvey was born to Jesse Harvey and Eloise Vera in Welch, West Virginia in the United States of American. His father was a coal miner. He had his first name Broderick from actor Broderick Crawford of Highway Petrol fame. At a young age, the family moved to settle in Cleveland, Ohio, on the East 112th Street now the Steve Harvey Way. By 1974, he had graduated from the Grenville High School.

Stephen Harvey continued his education at the Kent State University and later West Virginia University. While there, he was a member of the Omega Psi Phi fraternity.

Broderick Stephen Harvey has had his share of difficult time during his young age. He picked up several jobs including being an autoworker, a carpet cleaner, mailman, insurance salesman and a boxer to earn a living.

After trying several jobs, Broderick Stephen Harvey settled on comedy and had his maiden stand-up comedy performance at the Hilarities Comedy Club in Cleveland, Ohio on October 8, 1985. He still had to struggle through life and by the late 1980s, he became homeless having to sleep in his 1976 Ford. Throughout this period, he showered had to shower at swimming pool shows or gas stations.

Broderick Stephen Harvey finally had a breakthrough in his comedy career after contesting in the Second Annual Johnnie Walker National Comedy Search in 1990. He was a finalist in the contest. After the contest, he gained a long-term role as the host of “It’s Showtime at the Apollo.”

Stephen Harvey performed on the Kings of Comedy tour alongside, Bernice Mac, Cedric the Entertainer and D.L. Hughley in 1997. The tour was compiled into the film The Original King of Comedy, making Harvey more popular.

Acting And Other Career

Breaking into the limelight came with numerous opportunities. From 1996 to 2002, Stephen Harvey starred in the WB network show, The Steve Harvey Show. He had in 1994 played a starring role in ABC show, Me and the Boys. He played a role in the movie The Fighting Temptation in 2003, co-starred in the film Racing Stripes in 2005. He is the author of the books Steve Harvey's Big Time and Act Like a Lady, Think Like a Man. Harvey hosts the radio program, The Steve Harvey Morning Show.

Broderick Stephen Harvey can be said to be a walking controversy. He had made several controversial statements and had to come back to apologize. He called Cornel West and Tavis Smiley “Uncle Tom” during a radio show in August 2011. He later came to apologize. In a book interview with Larry King in 2009, Harvey called atheist Idiots with no moral barometer. He asked women never to marry an atheist. In January 2017, Harvey had to come and apologize for making jokes as to whether a white or black woman would want to date an Asian man.

Broderick Stephen Harvey has four children from three different marriages. He also has three stepchildren. His first marriage was to Marcia Harvey with whom he had twin daughters and a son. After their divorce, he married Mary Shackelford and had a son with her. They divorced in November 2005. He then married his current with, Marjorie Bridges in June 2007. Marjorie came into the marriage with three children.