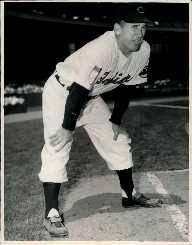 Al Lopez was born on August 20th, 1908 in Tampa, Florida. He gained his fame for being a skilled manager as well as a professional baseball player. Back in the day, he played professional baseball in the major league as a catcher. He played for several teams in this league including Brooklyn Robins / Dodgers, Pittsburgh Pirates, Boston Bees, and Cleveland Indians. As a manager, he managed two teams including Chicago White Sox and Cleveland Indians. Lopez suffered a heart attack on October 30th, 2005 which led to his death at the age of 97.

Alfonso Ramon Lopez was born on August 20th, 1908. Both of his parents were Spanish immigrants and that they had migrated to America through Cuba. His father’s name was Modesto Lopez. He worked in a cigar factory as a selector. During this time, cigar business was thriving in the small town that Lopez was born in. This town was called Ybor City. During Lopez teenage years, he worked as a deliverer for La Joven Francesca Bakery. His main duties were to deliver the freshly baked Cuban bread from one door to the other. His brother’s encouragement boosted his interest in baseball. Around this time, the World Series of 1920 was going on and Lopez and his brother, Emilio were keen on the results.

Initially, Lopez was schooling at Sacred Heart College where he took his high school lessons. However, his interest in baseball overwhelmed him to the extent that he quit school. Also, he had to quit from delivering bread. This time he was only 16 years old and made signing with Tamper Smokers. First, he began with the minor league Class D. Lopez’s impressive abilities on the field caught the attention of Walter Johnson who was a pitcher with a star in the Hall of Fame. With time, Lopez honed his talent through these minor leagues and in 1928; he made his major league debut with Brooklyn Dodgers (now known as Los Angeles Dodgers).

Two years later, Al Lopez had gain recognition with his contribution to the team, and he became a regular playing the position of a catcher. This went on for several seasons, but he later changed teams during his professional baseball career. He initially began catching for the Dodgers in the season of 1928 and 1930 to 1935. After this, he switched and went to play for Boston Bees in 1936 to 1940. This was followed by Pittsburgh Pirates in 1940 to 1946, before concluding with the Cleveland Indians in 1947 as a player.

As a player, Lopez was an expert defender, and this gained him recognition in the field. He was also well known for his prowess in handling pitchers. With such respect, he managed to for the All-Star game for two times. In 1945, Lopez broke the record that was once held by Gabby Hartnett-this was for the number of games caught. Lopez’s numbers stood at 1918. This record stood as it is for more than four decades before being broken by Bob Boone in 1987.

Soon after Al Lopez retired from playing as a professional baseball player in 1947, he did not take time before beginning his career as a manager. He began his management career in 1948 with minor league baseball teams. His first team to manage was the Indianapolis Indians. This team was an affiliate of the Pittsburgh Pirates. He was successful with the team as they finished in first place once and twice as second place. His triumph earned him another contract that would later help him enter into the Major League Baseball.

In 1951, Lopez signed with the Cleveland Indians and led to his team’s success with over 90 games turning out to be victorious. Nonetheless, they still did not finish the first position, but they took second place behind New York Yankees from 1951 to 1953. Later on, he went on and resigned after having won 570 games and losing 354 making this a winning percentage of 617.

His exceptional management skills were high on demand, and he took a month before working with the Chicago White Sox. After sitting on second place in 1957, in 1959 Lopez won the American league with his team. However, they did not win the World Series as the lost to Los Angeles Dodgers.

Al Lopez passed away after suffering from a heart attack on October 30th, in 2005.