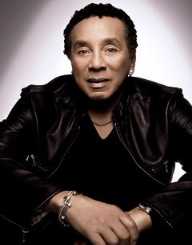 Smokey Robinson has 4000 written songs. Among these songs, 37 of them made Top 40 hits. Some of them include the “Love Machine,” “Tears of a Clown,” and “Tracks of my Tears.”Robinson also helped some groups in writing and producing their songs, e.g., Mary Wells in the song “My Guy” and The Temptations in their song “My Girl.”

The early career of Smokey Robinson picked up slow in the 1950s. Being born in a rough neighborhood, this never deterred Robinson from being a famous song writer, producer, and a world’s renowned singer. In 1950, Robinson’s career began as he sang in local groups.

In 1955, he brought together the first vocal group which was called “the Five Chimes.” This team pulled together Robinson and his former schoolmates Ronald White, Pete Moore, James Grice and Clarence Dawson. One year later, the Five Chimes changed its name to the Matadors.

Two years down the line, things did not workout well for the group. As a result, some members left the team including Dawson, Grice and a recent replacement to Dawson named Emerson Rogers also left. Bobby Rogers and Claudette Rogers came in and joined the group. With new group members, the team later changed its name from the Matadors to the Miracles. Good things began to unveil for the group as they made themselves famous in the R&B scene.

In 1958, things took a decisive turn as Smokey Robinson met record producer called Berry Gordy. Gordy was fascinated with Robinson’s and his group the Miracles talent. It is for this reason that Gordy helped them in landing their first contract with End Records.

The Miracles went ahead to release “Got a Job.” This was their first single in the contract that they had signed up with End Records. This first single was popular in Detroit only and that it did not hit the headlines nationwide.

In 1960, the Miracles released yet another song “Shop Around.” This was a big hit for them. This hit R&B song was released under the Motown company records. Smokey Robinson was the writer of the song. With the numerous followers that the group had amassed, the following years were a success. Their second hit came in 1962 with their song “You Got a Hold of Me.” Their third hit song came in 1967 when they released “I Second That Emotion.”

It did not take time before Smokey Robinson fell in love with Claudette Rogers. This was shortly after she had joined the Miracles. The duo tied a knot in 1959. Ten years later, Robinson grew tired of the divided mind he had between his family, the Miracles, and Motown. He, therefore, opted to retire from the group.

According to Robinson, this would allow him to spend more time with his family. He did not leave immediately as their 1966 song “Tears of a Clown” hit the headlines in 1970. Nonetheless, Robinson took his path a year later before beginning his solo career in 1972.

Beginning of His Solo Career

In his solo career, Smokey Robinson created a name for himself with his new smooth soul music. Subsequent years were a significant success as Robinson’s albums gained popularity. These records were A Quiet Storm and Touch the Sky. Both listened in 1974 and 1983 respectively.

In the mid 1980s, Robinson went through a turbulent period. He had been severely addicted to cocaine. It was also during this time that he went through a divorce with his wife Claudette in 1986. Fortunately, thanks to his spiritual reawakening, Robinson managed to give up on drugs.

In 1987, things turned up bright again as Smokey Robinson won his first Grammy Award while working solo. This award came about after he released his song “Just To See Her” in 1987. This song was from the album One Heartbeat.

In 1992, he released another solo “Double Good Everything,” after signing up with SBK Records. Robinson’s solo career took another turn in 2004 as most of his songs now featured the spiritual belief that he had. He went ahead to release his first gospel album Food for the Spirit.

Recently, Smokey Robinson is still entertaining people by performing live. Similarly, he has been inspiring some groups by publicly speaking to them about his real-life experiences. In the business world, he is also playing well. Robinson has his own food company called Smokey Robinson Foods.