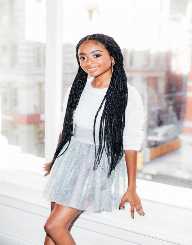 It is consistently a one of a kind joy when one sees a young actor stealing the show with his or her tremendous talent. It doesn’t matter whether it’s on screen or stage, they aren’t just entertaining but energizing the next generation. Meet Skai Jackson, at only 15 years old; she has managed to entertain the world and beyond. I guess it was a natural born talent that started even before learning to walk. A huge appreciation from the audience has helped the teeny-weeny girl to get where she is now. Skai started off as a baby model, and currently, she takes a position as a Disney actress-social media personality. She has over 2 million followers on her Instagram account. Read further to understand more about her effervescent talent.

Skai Jackson acts as an inspiration to other teens out there. She has embraced confidence and independence throughout her life. At her tender age, Skai has proved that sky is the limit. According to sources, she once mentioned how her height makes other to have fun with it. In fact, she was once bullied because of being short than her age mates. Not to mention her nationality was also criticized. Skai acted maturely where she also advised other kids to seek further help in case they find themselves in the same situation. Above all, she neglected everything that seemed to pull her down. At this point, focus and faith was her best friend.

She continued to fathom further where she realized that she could act and model at the same time. Today she has proved others wrong by conquering the world of fame. There is no secret that the world and beyond appreciates her talent. With her charming personality, Skai has made sure that she has charred all events, especially the red carpet attendance.

On April 8, 2002, Kiya Cole and Jacob Jackson were blessed with a daughter. She was none other than Skai Jackson who was first seen in the world in New York City. She currently spends her teenage life with her dearest mother and her two siblings. Kiya Cole also acts as her daughter’s manager, especially as a YouTuber ‘kiyacole1’. Skai’s YouTube channel has over 11,000 subscribers.

Skai’s career started when she was nine months old when she saw herself on a small screen. She commenced her journey as a baby model where she appeared in several commercials. Before celebrating her tenth birthday, she was helped by her mother to sign-up for a social media account. It was here that she was promoted to act as a host for a teens show called Jessie. In the middle of all, she discovered that she could be a promising actress and model.

At the age of three Skai was seen on a big screen where she starred in a 2007 movie called Liberty Kid. She followed it up with The Smurfs, The Rebound, Rescue Arthur and Me. Other roles in television series followed including Sesame Street, Royal Pains, and Boardwalk Empire. She also acted as a voice character in a film like Dora the Explorer. In 2011 Skai’s acting career cemented the world of fame when she starred in one of the Disney Channel called Jessie.

Aside from acting, Skai Jackson also loves trending outfits. I think she has embraced the world of fashion since her childhood days and modeling acted as a pathway. She once mentioned that she would once come to own a clothing line or even working for major labels in the US. Skai’s indelible personality allows her to welcome more praises and accolades in her journey. There is no doubt that she wants to present a successful graph at the end of her career. She is an inspiration to the young and the old; we just can’t wait for this gem to skyrocket as a colossal performer one day.