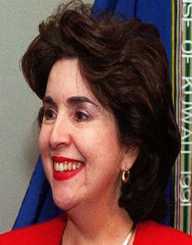 Sila Maria Calderon was born on September 23, 1942. She is a Puerto Rican Politician. She is also a businesswoman and a philanthropist. She is renowned for being the first lady to be elected as the Governor of the Commonwealth of Puerto Rico.  She became a Spanish citizen in 2012.

Sila Maria Calderon was born Sila Maria Calderon Serra on September 23, 1942, in San Juan, Puerto Rico. She was born to August Calderon and Sila Serra Jesus. She studied in Colegio Sagrado Corazon de Las Madres in Santurce, Puerto Rico. She later joined Manhattanville College in Purchase, New York. In 1964, she graduated with a Bachelor of Arts Degree in Government. She then enrolled to the University of Puerto Rico in the Graduate School of Public Administration.

In 1973, Sila Maria Calderon's career started when she was named Executive aide to Luis Silva Recio who was the Labor Secretary. In 1975, she became the Governor Rafael Hernandez Colon’s Special Aide for Economic Development. In 1976, Governor Colon was defeated in the elections, and Calderon had to leave. She later worked at Citibank as The Director of Business Development in N.A. in San Juan. In 1978, she was appointed Commonwealth Investment Company’s President.

In 1984, after the re-election of Governor Colon, she became the Chef of Staff. In 1988, she was made the 12th Secretary of the State of Puerto Rico. She was also a member of the Economic adviser Council and Board of Directors for the Puerto Rico Government Development Bank and Centre for Specialized Studies in Government Management. She was also a president of the Inversions Committee of the Industrial Development Company. She also served as the Secretary General for the Commission that organized the activities of the 5th Centenary of the Discovery of the Americas.

In 1989, Sila Maria Calderon filed her resignation and went back to concentrate on her business errands. She was a member of big local corporations which included BanPonce, Banco Popular, and Pueblo International. She was also a member of the Committee of Puerto Rico’s Economic development, the Sor Isolina Ferre Foundation. In 1991 and 1992, she served as Puerto Rico Public Broadcasting Corporation’s President.

In 1995, she embarked on politics. She contested for the Mayor of San Juan primary for Popular Democratic Party. She became victorious. She was appointed Municipal Committee of the Popular Democratic Party’s President in San Juan. She later became a member of the Party’s Board of Directors. In 1996, she was elected San Juan’s Mayor.

She later formed the Special Communities Program to cater for the empowerment and the economic development of the poor communities. In 1999, she announced her candidacy to run for the gubernatorial seat of Puerto Rico. She later emerged victorious on the primaries hence assuming duties of the Party’s President.

In 2000, Sila Maria Calderon campaigned for the seat leading the Popular Democratic Party. She emerged victorious and became the first female governor of Puerto Rico. She after that made her two daughters the first ladies. She successfully fought corruption and tried to eradicate poverty. She was then commended by the then President George W. Bush and Department of Housing and Public Works. In 2003, she announced her desire not to contest once more.

She is currently running her errands in the business field. She runs a consultation firm named Inter-American Global Links, Inc. she is the chairperson of The Center for Puerto Rico: Sila M. Calderon Foundation. In 2007, she was elected New York Public Library’s Trustee. She is a member of the Primera Chicago and Health and Hospital Company Foundation of New York City’s advisory boards.