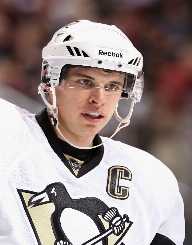 Sidney Crosby is one of Canadian most coveted ice hockey players. He is acclaimed as one of the best hockey players in the word for his passing abilities, on-ice vision and work ethics. Born on August 7, 1987, he got committed to hockey at a very tender age has gradually risen to fame. Sidney Crosby makes hockey very entertaining to watch and has over the years built a solid reputation for himself as a complete player.

He is the captain of the Pittsburgh Penguins of the National Hockey League and ever since Sidney Crosby was drafted from the Quebec Major Junior Hockey League he has remained very consistent. Crosby top-notch play started in his junior career at Rimouski Oceanic, winning him back to back CHL Player of the Year Award.

Sidney Crosby was named among the 100 Greatest NHL Players in history on January 27, 2017. Sidney Crosby is not only good at the team level but has also represented his country in several tournaments. He has played in both junior and men’s team of Canada. Sidney Crosby most recent national tournament was at the 2016 World Cup of Hockey in which Canada won gold, and he was elected the Most Valuable Player.

Sidney Crosby was born on August 7, 1987,at the Grace Maternity Hospital, Halifax, Nova Scotia Troy and Trina Crosby. Troy played for the Verdun Junior Canadians in the Quebec Junior Hockey League as a goaltender. Picking inspiration from his father and Steve Yzerman, Sidney Crosby had the urge for hockey at age two. That was when he started practising by himself by shooting pucks and later skating at age three.

He had his education at the Astral Drive Junior High School in 1999 and did very well academically. He was later transferred to Shattuck-Saint Mary’s in Faribault, Minnesota, where he played for the school team. In 2005 he graduated from the Harrison Trimble High School, Moncton, and was at the time playing for Rimouski Oceanic in the Quebec Major Junior Hockey League (QMJHL)

Practicing had as a child; Sidney Crosby was just ready for the game but had a little challenge. The Nova Scotia Minor Hockey Council did not allow him to play midget because he was two years younger 15 to 17 years tag. When the decision came, Sidney Crosby family tried a lawsuit but was unsuccessful. A year later he joined triple-A Dartmouth to display his skills and talent. That year, he made a total score of 217 both at regular season and playoffs,a contribution that placed Dartmouth at second place at the 2002 Air Canada Cup. At the national tournament, he emerged as the top scorer and MVP with 24 points.

He recalls that his years at the midget were very challenging and full of abuse. He encountered parents who insulted and threatened him as well as opposing players who intentionally wanted to injure him. Sidney Crosby disclosed this during an interview with CBS’s Hockey Day in Canada. That was the reason behind his decision to in the American hockey program at Shattuck-Saint Mary’s Boarding School Minnesota in 2002.

During the 2003 Midget Draft, Rimouski Oceanic chose Sidney Crosby first overall in the QMJHL. He was then set for an exhibition game in which he scored eight points which were an impressive start. His debut regular game followed with a goal and two assists. With continued impressive play, Sidney Crosby won QMJHL Player of the week on two consecutive and won it on four other occasions as well.

That season, Sidney Crosby also won the Canadian Hockey LeaguePlayer of the Week three times. His rookie season ended with 54 goals and 81 assists in 59 games to earn him the Jean Beliveau Trophy as atop point scorer. He also won the RDS/JVC Trophy and Michel Briere Memorial Trophy making him the first QMJHL player to win three awards in a season.

Sidney Crosby turned down an offer of $7.5million from the Hamilton in the World Hockey Association just to remain with Oceanic in the 2004-2005 season. That season he continued with his terrific performance to dominate the league winning several laurels and qualifying Oceanic to the 2005 Memorial Cup but lost in the final games. At the end of the tournament, he got a place in the Tournament All-Star Team and also won the Chynoweth Trophy. Though the Penguins had a bad season, Crosby personal records were intact with 63 assists and 102 points.

Sidney Crosby had a successful transition from the QMJHL to the NHL and was the first overall draft by the Pittsburgh Penguins for the 2005-2006 season. He made his debut with the team against the New Jersey Devils on October 5, 2005, making one assist. Three days later, after he scored a debut goal and also made three assists in a match against the Boston Bruins. As a rookie in his team, Sidney Crosby was given the assistant captain position by Penguins new coach Michel Therrien on December 15, 2005. The decision was met with several criticisms from hockey pundits, especially Don Cherry.

At age 18 and a rookie, he became the youngest player to score 100 points in a season in the NHL history. His second season saw much improvement and with effortless play, he chalked several successes. The 2006-2007 season ended with Crosby scored 36 goals with 84 assist in 76 games to become the leading scorer for the season.

He also made a record with that accomplishment as the first teenager to achieve that feat since Wayne Gretzky in 1980. He added up as the youngest player in NHL history to win the Art Ross Trophy. At the start of the 2007 season, Penguins extended Crosby’s contract with a $43.5 deal to expire in the 2012-2013 season.

Sidney Crosby got injured midway into the season but ended the season with 72 points in 53 games. His career with the Penguins also saw a boost season upon season despite some injuries that came along the way. He won several awards,making and breaking many records. His 2016-17 started slowly after a diagnosed with a concussion. He, however, came back stronger to score 30 in 45 games and reaching the 1,000 points mark with 757 games on February 16, 2017.

Sidney Crosby has competed internationally for Canada. As a junior, he was part of the Team Canada at the 2003 U-18 Junior World Cup in the Czech Republic and Slovakia as the youngest player. He also competed in other tournaments for the junior team. He was part of the men’s team at the 2006 World Championships as an alternative captain.

He also joined team Canada for the 2010 Winter Olympics in Vancouver as partook in several other competitions. His most recent tournament was at the 2016 World Cup of Hockey in Toronto where he captained the Team Canada. Team Canada won Gold in that tournament and Crosby scored 10 points winning the Conn Smythe, Hart Trophy and World Cup MVP.

Sidney Crosby founded the Sidney Crosby Foundation in 2009 to raise support for the less privileged children. He has also started a Hockey School in Cole Harbour in 2015. He currently lives in Sewickley, Pennsylvania, a house he purchased in 2010. He also has another house on Grand Lake in Halifax, Nova Scotia.