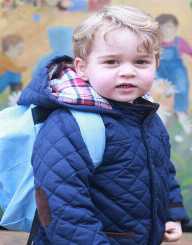 Prince George of Cambridge was born on July 22, 2013. He is a member of the British Royal Family. He is currently five years old.

The birth of Prince led to the issuance of commemorative coins by the Royal Canadian Mint, Royal Mint, and the Royal Australian Mint. Prince George is considered as the future king of Britain. His birth was marked with twenty one gun salutes in the capitals of the United Kingdom, New Zealand, Bermuda and Canada. The bells of Westminster Abbey were also rung followed by bells from other churches. The Duchess left the hospital with her newborn baby on July 23, 2013. The following day the name of the baby was announced to the public.

In 2014, Prince George went on his first royal tour with his parents to New Zealand and Australia. In June the same year, he made his first appearance in public on the Buckingham Palace balcony following the Trooping the Color Parade. The parade marked the Queen’s Official Birthday. In 2016, the Prince met the then President of the United States of America, Barack Obama. In 2017, he accompanied his parents on a diplomatic visit to Poland and Germany. His sister, Princess Charlotte also came on the foreign tour.

In January 2016, he started attending the Westacre Montessori School Nursery at Anmer Hall in Norfolk for his education. The school is near his family home. In 2017, he began his primary education at the private Thomas’s School in Battersea where he is known as George Cambridge. Prince George’s official title and style is ‘His Royal Highness Prince George of Cambridge.’