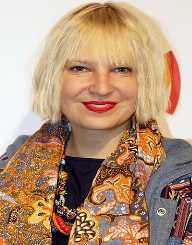 Sia Furler was born on December 18th, in 1975. She is famous for being an Australian singer, record producer, and a songwriter. Her career took off after joining the acid jazz band in the mid-1990s. her career breakthrough came in 2014 after recording the hit single dubbed “Chandelier.” She also garnered fame with the hit song called “Elastic Heart.”

Sia Furler was born Sia Kate Isobelle Furler on December 18th, in 1975. Her place of birth was in Adelaide, South Australia. Phil Colson, her father, is a musician. On the other hand, LoeneFurler, her mother works as an art lecturer.

The musical talent runs in the family as Furler is the niece to renowned actor and singer, Kevin Colson. Growing up, Furler admired the likes of Sting, Stevie Wonder, and Aretha Franklin.

Sia Furler joined Adelaide High School before later joining the acid jazz band called Crisp where her singing career took off.  Her contribution was in two albums, i.e., Word and the Deal in 1996 and EP Delirium in 1997. Sooner or later, the Crisp band split, and Furler went on to pursue a solo career.

Sia Furler released her first single album titled Only See with Flavored Records. The album did not perform well as it only managed to sell 1,200 copies. Later in 1997, Furler migrated and went to live in London. Here, she partnered with Jamiroquai band as their background vocalist.

Three years later, she entered into a contract with Dance Pool, a Sony Music label. Sooner or later, her debut single titled “Taken for Granted” was out. The song performed well with a top ten ranking in UK Singles Chart. In 2001, Furler released Healing is Difficult.

With time, Furler abandoned Sony Music and signed up with Go! Beat, a branch of Universal Music Group. Owing to her short-lived success, she bagged home a Breakthrough Songwriter award in 2002 APRA Awards.

After enjoying a brief success with We are Born in 2010, Sia Furler decided to retire from a recording artist career. She developed a particular interest in songwriting. Shortly after, she wrote “Titanium” for Alicia Keys. Nonetheless, the song was later diverted and sent to David Guetta. The song performed well in the U.S. charts and other European states.

Later, in 2013 Furler released another hit dubbed “Elastic Heart.” This song was utilized in the hit film The Hunger Games: Catching Fire. The following year in July she released an album titled 1000 Forms of Fear. This was huge for her as it was ranked number one in the U.S. Billboard charts. The lead single in the hit album earned her immense recognition. The song “Chandelier” hit the streets in March 2014.

In 2014, Sia Furler wedded Erik Anders Lang, a well-known filmmaker. Nevertheless, the two later announced that they would be divorcing in December 2016.