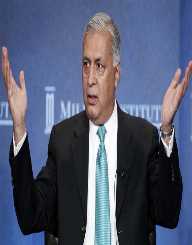 Shaukat Aziz is of Urdu descent, and he was born in the Karachi province of Sindh on the 6th  day of March 1949 in Pakistan. His father worked as one of the leading lights of radio engineering in his country and was a recipient of numerous national honors. Shaukat had his early education at Abbottabad Public School before proceeding for middle education at the St Patrick High School.Aziz enrolled at the Rawalpindi Gordon College in Rawalpindi; from where he graduated in 1967. He left here with a Bachelor’s degree in the field of Economics.

He went for his masters at the University of Karachi’s Institute Of Business Administration after his Bachelor’s degree and graduated with an MBA in 1969. He was accepted for an internship at Citibank before he left graduate school

Shaukat Aziz's internship at Citi opened a new world for Shaukat in the U.S after which he took on global roles at the bank. He worked in Philippines, Saudi Arabia, Greece, and Singapore in the years that ensued. Aziz's characters included stints in, Corporate Planning, Corporate, and Investment Banking, serving as Chief Financial Officer as well as Managing Director at Citibank Singapore.

He topped his Citi career as the Corporate Director in charge of Asia Pacific global finance operations. He led the reach of multinational banking into Pakistan in the 1990s that culminated in the massive branch network of Citi across the country.

Shaukat Aziz spearheaded Citibank’s dominance in his country of birth, and this led to close collaboration with the central government. This was evident during Benazir Bhutto’s reign but also extended to Nawaz Sharif’s government.
Aziz was able to deepen his American contacts during this period and ultimately since his training and reach was evident, Aziz was appointed in 1999 as Pakistan’s Finance Minister. He leveraged on the American housing policy at the time to boost Pakistan’s economy. In 2003, he introduced low-rate mortgages, and this sparked a construction wave.

The middle-class became the recipient of the benefits of Shaukat’s policies, and the expanded housing helped to spur GDP progression as jobs were created across the board. The country’s tax base also proliferated for the next nine years. By 2007, the tax collection bested the Rs 1 trillion mark from Rs. 500 billion in the year 1999.

Shaukat Aziz proved he was an astute banker going by his Citibank credentials. He never laid claim to academic prominence, but he was well-schooled in that slant. He possessed credentials that rivaled the likes of Nick Brady and Bob Rubin, who served out their terms under the Reagan and Clinton presidency with acclaim. Shaukat had a firm grip on the underbelly of consumer credit, investment as well as banking and finance vis-a-viz their place in boosting a country’s economic growth processes. Shaukat bolstered wholesale reforms that were of fundamental structural nature in his country and galvanized the finance, investment, and banking sectors to underpin Pakistani economy. Shaukat Aziz's efforts led to remarkable improvements in land and labor optimization as well as a 15-fold increase in the country’s higher education annual appropriation.

Shaukat Aziz's focus on higher education funding was to bolster the needed skills to drive the economy of his country. His efforts were accepted in the prevailing social commentary of the time to have been mostly successful. The country’s FDI-Foreign Direct Investment in direct terms spilled over the $5 billion mark circa 2006/07. The national debt also dropped below the 55 percent mark in GDP terms within this period.

Shaukat Aziz's political reign was first as finance minister in 1999 and as PM in the four years to 2007. His era was such that heralded capable hands at the finance ministry who were a match for multilateral corporations as financial transactions were agreed and concluded. The period of lethargy in this field of governance got eclipsed in such vivid terms that were appreciated by all and sundry. The inflow of funds saw a drop in the cost of borrowing as the national debt plummeted to record levels that were previously unattainable. While his tenure as PM was one that had mixed results, what was evident was that it was new terrain for him. The politics of a developing nation was a gulf away from the boardroom and finance engineering he was well-acquainted with.

Shaukat Aziz worked  with Anna Mikhailova of the Sunday Times to write a book which was titled “From Banking to the Thorny World of Politics.” This literary adventure chronicled the intricacies of economic diplomacy in the midst of international politics that drew in America, India, China, and Afghanistan. Shaukat joining of Musharraf’s government in 1999 was no doubt a controversial one, but it was a stepping stone. This helped him to make a mark on his country’s economic progress. He was named the 2001 finance minister of the year by the respected Euro money group.

Outside of the boardroom, Shaukat also has a reputation as a debonair and cosmopolitan man with admirable élan. He has a dressy taste and possesses a sense of high-class fashion. He is branded as a self-styled schmoozer because of his ability to cut deals and his global network of who-is-who in the corporate world.

Shaukat Aziz left politics and returned to London to drive his private sector engagements after his stint in government. He built a base in the British capital from where he journeys across Dubai, New York and the rest of the globe. He features as a public speaker across the globe and consults for the world’s ultra-rich class Aziz's directorship roles have proliferated in recent years as he made a success of his economic and corporate adventures.

He is on the board of the Blackstone Group founded by Steve Schwarzman. The company is reputed as the world’s largest real estate investor.

Shaukat Aziz is married to Rukhsana Aziz, and they both have three children.