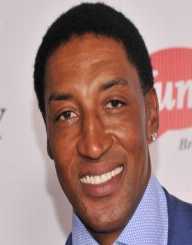 Scottie Pippen is an American ex-basketball player who is best known for being part of the Chicago Bulls dynasty that dominated basketball in the 1990s.

Scottie Pippen was born in Hamburg, Arkansas on 25 September 1965. Pippen was the youngest of twelve siblings. His parents, Ethel and Preston Pippen, were both over six feet tall. Pippen’s father worked in a paper mill but later suffered a semi-paralyzing stroke. The family was quite poor. Pippen attended his local high school, Hamburg High School, and played point guard for the basketball team. Despite making the state playoffs and all-conference honors in his final year in high school, Pippen was not offered a college scholarship. Pippen was only six foot one and weighed just twelve and a half stone; this made many colleges consider him to slight for basketball. A coach at the University of Central Arkansas took Pippen on as a student coach to give Pippen a chance to study.

However, Pippen would earn a spot on the basketball team as a walk-on. The college competed in the National Association of Intercollegiate Athletics which did not attract much attention from NBA scouts. Pippen continued to grow during his time at college and would eventually measure six foot eight inches. By the time of his senior year in college Pippen was the dominant player in the conference and was averaging a double-double in rebounds and points per game. These impressive numbers attracted NBA interest despite the conferences lowly standing.

Scottie Pippen was drafted by the Seattle SuperSonics using the fifth overall pick in the 1987 NBA Draft. However, he was traded to the Chicago Bulls for Olden Polynice, and draft picks before the season began. He was the backup small forward for the Bulls but would play in 79 games over the course of his first season. Pippen made his debut for the Bulls in a 104-94 win against the Philadelphia 76ers. Pippen developed a close bound with Chicago Bulls star player, Michael Jordan and they would form the bedrock of the franchise’s success. Pippen assumed the starting small forward position for the Bulls in the 1988 playoffs. The Bulls were defeated in the second round of the playoffs by the ‘Bad Boy’ Detroit Pistons, who would become fierce rivals of the Bulls in the coming years.

Pippen was hampered slightly by injuries in his second season but managed to improve his stats across the board. The Bulls would claim the six seed spot in the Eastern Conference playoffs and advanced to the Eastern Conference Finals by defeating the Cleveland Cavaliers and the New York Knicks. In the Finals, they again faced the ‘Bad Boy’ Pistons who led by Isiah Thomas and Bill Laimbeer. Their physical style characterized the Pistons, and the Bulls’ Michael Jordan came in for the most attention. The Pistons emerged victorious, winning the series 4-2, and would ultimately sweep the LA Lakers in the NBA Championship Finals. The following year Pippen and the Bulls would again reach the Eastern Conference Finals, this time as the number 3 seed. They again faced the Detroit Pistons. The teams split the first six games. The Pistons crushed the Bulls 93-74 in the deciding game.

Pippen was a passenger in the seventh game as a severe migraine hampered him. Pippen stepped up his game markedly in the 1990-91 season as he landed three triple-doubles and averaged 17.8 points a game. The Bulls finished the regular season as the number one seeds in the Eastern Conference and stormed through the playoffs. Crushing the New York Knicks 3-0 and the Philadelphia 76ers 4-1. The Bulls then exacted revenge on the Detroit Pistons, sweeping them in the Eastern Conference Finals and putting an end to their dream of a ‘threepeat.’ In the Championship Finals, the Bulls beat the LA Lakers 4-1. The following season the Bulls finished as the number one overall team winning sixty-seven games. Pippen played every game for the Bulls and 7.7 rebounds, 6.3 assists, 2.1 steals, 1.1 blocks and 21 points per game as the Bulls retained the NBA Championship.

Pippen was also selected for the USA Olympic basketball team. The ban on professionals playing in the Olympics and Pippen was selected for the star-studded team which was popularly known as the ‘Dream Team.’ Other prominent names on the team were Michael Jordan, Larry Bird, Magic Johnson and Charles Barkley. The team took the gold medal in Barcelona, winning their games by an average of 44 points. The Bulls would again win the NBA title in 1993 as they defeated the Phoenix Suns in the Finals. This marked a three-in-a-row for the Bulls and Pippen. After the win, Michael Jordan retired from basketball to play baseball. Pippen then became the Bulls main man. He finished the season with a career-high average of 22 points and 8.3 rebounds a game. The New York Knicks would defeat the Bulls in the second round of the playoffs. Pippen did enjoy one of his most iconic moments during the series as he dunked over Patrick Ewing. The 1994-95 went poorly for the Bulls until Michael Jordan made a spectacular return to the court and led the Bulls to the playoffs. They were defeated in the second round by a Shaquille O’Neal inspired Orlando Magic.

Pippen led the Bulls in every statistic during the season. The 1995-96 season marked the height of the Bulls power. With a returned Michael Jordan and the addition of former ‘Bad Boy’ Dennis Rodman the Bulls posted the greatest season in Basketball history, winning 72 regular season games and 87 overall. The Bulls would only drop three games in the playoffs as they crushed all opposition on their way to Pippen and Jordan’s 4th title. The Bulls with Pippen and Jordan would go on to complete another ‘threepeat,’ winning the 1997 and 1998 titles. The Bulls traded Pippen to the Houston Rockets in 1998. The Rockets gave Pippen a multimillion-dollar pay increase. There Pippen teamed up with Charles Barkley, but there was none of the same chemistry he enjoyed with Jordan. The Rockets would crash out of the playoffs in the first round to the LA Lakers. Pippen’s relationship with Barkley had become openly hostile by the end of the year, and he moved to the Portland Trailblazers.

Pippen was notably passed his prime, although he managed to continue to post good defensive statistics. The Trailblazers would reach the playoffs in each of Pippen’s seasons but were defeated three times by the dominant LA Lakers and by the Dallas Mavericks in Pippen’s final season in 2003. Pippen returned to the Chicago Bulls and played one injury-ravaged season with them. The Bulls were a shadow of the team Pippen left and won only 23 games. It was the first time in his sixteen years in the NBA that Pippen did not make the playoffs. He retired in 2004.

Scottie Pippen married his first wife Karen McCollum in 1988. They had a son, Antron, before divorcing in 1990. He married his current wife, Larsa Younan, in 1997 and they have four children together. The Chicago Bulls retired Pippen’s jersey number following his retirement.