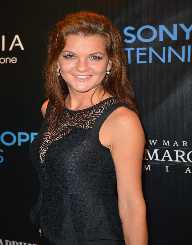 Agnieszka Radwanska is a Polish tennis player by profession born on March 6th, 1989. In 2014, she was ranked position three worldwide. The talented tennis player also reached Wimbledon finals in 2012. However, Serena Williams took the won in the tournament. Later in the 2014 Australian Open, she reached the semi-finals. However, in 2017, she could not participate in the competition after she injured her foot severely.

Agnieszka Radwanska was only a teen when she attained the Wimbledon junior singles title. Similarly, she also won the French Open junior championship. During the grand slam tournament, she made it to the finals and became the first player ever in the Polish history to have competed for that level. Currently, she holds position 12 worldwide according to the Women's Tennis Association (WTA). Besides tennis, she is a great philanthropist who has supported charitable projects since 2007.

Agnieszka Radwanska was born on March 6th, 1989. Her place of birth was in Krakow, Poland. She is the daughter of Marta Radwa?ska and Robert Radwa?ski. Robert introduced her to playing tennis when she was still quite young. By the age of four, she began playing the game. urzula, her younger sister is a tennis player as well.
Agnieszka Radwanska attended universities in Kraków where she studied tourism.

Agnieszka Radwanska began her career in tennis when she was in her teen years. According to her, her main motivators are Martina Hingis and Pete Sampras. Her star moments kicked off in the 2005 Wimbledon girls' singles championship when she played quite impressively. The following year she won in the junior French Open title.

In the 2006 Wimbledon championships, she managed to go to the fourth round and lost to Kim Clijsters another Belgian star. However, the victory was hers in 2007 during the Nordea Nordic Light Open. This was her first WTA title. The following year, she went ahead to add three more titles. As a result, she advanced to the Wimbledon and Australian Open quarterfinals. After that, her victories subsided till the 2011 Mercury Insurance Open when she won another WTA title.

The year 2012 was a victorious season for the Polish star. She won titles in some tournaments this year including the Dubai Tennis Championships. Agnieszka Radwanska also secured a title at the Brussels Open and the Sony Ericsson Open. She also participated in the Wimbledon singles draw till the finals. Sadly, she lost to the American Serena Williams. Still, she became the first woman from Poland to advance to such level in the Open era.

In 2013, she also won in some tournaments. She won other three titles in this year. Towards the fall of 2014, Martina Navratilova became her coach.

Besides being a great tennis player, Agnieszka Radwanska is also a philanthropist. She is known to help those in need through her contributions towards charitable events. Since 2009, she has participated in helping others along with her sister Urzula. For instance, the two sisters are among the supporters of Habitat for Humanity. Furthermore, they also support its project in Warsaw.

Agnieszka Radwanska got engaged to Dawid Celt in 2016 and wedded in July 2017. Dawid is a former professional tennis player just like his wife.