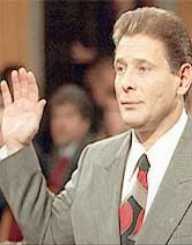 Mobster Sammy Gravano was born Salvator Gravano was born on the 12 March 1945 in Brooklyn, New York to Caterina and Giorlando Gravano. He was one of three children, with two older sisters. His father ran his own garment business, and the family lived a comfortable lifestyle. Gravano was in his early teens when he joined a street gang, the Rampers. He was nicknamed The Bull by locals because of his fighting ability.

Sammy Gravano had learning difficulties at school and left at age 16 after the 8th Grade.

After school, Sammy Gravano spent two years in the U.S. Army where he reached the rank of corporal.

Sammy Gravano became involved with the Costa Nostra in the late 1960s via Anthony Spero whose family had dealings with the Colombo crime family and Carmine Persico. Gravano was involved with armed robbery, hijacking, and theft before moving into gambling and racketeering. Gravano won the approval of Joe Colombo, the boss of the family. His first murder was in 1970 when he killed Joseph Colucci. Gravano went on to confess to a total of 19 murders.

When the crackdown on New York mob families occurred in the late 1980s, Sammy Gravano was indicted with John Gotti. By that stage, he was Gotti’s righthand man but changed sides in October 1991 when he discovered that Gotti had been dismissive of him at the Ravenite Social Club via wiretaps the authorities had planted inside the family’s Little Italy headquarters.

So Gravano worked out a sweetheart deal with prosecutors and testified against his boss and other Mafia members. He went on to testify throughout six years and helped jail dozens of mobsters. Under the deal, Gravano was given five years in prison.

When released from jail, Sammy Gravano settled with a new name and identity in Arizona. He wrote a biography, Underboss which was used by defence attorneys of his victims. In early 2000, he was arrested for running a drug ring from his home. In June 2001, he pleaded guilty. He was found guilty, was convicted and imprisoned. He was released in 2018.

Sammy Gravano married Debra Scibetta in 1971. The couple had two children together.