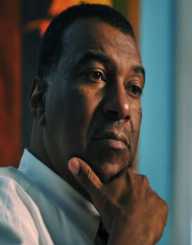 Cornell Jones is an American drug dealer who rose in power in Hanover, Washington due to the massive drug-dealing business that later on landed him in prison.

Jones spent his adolescent years in one of the housing projects located in Hanover, Washington during the 1940s. As a way to support their family, his father worked as a bricklayer but could only amount to so little. As a result, the young Jones made ends meet by resulting in illegal trade in the streets which got him in trouble both with local boys and at school.

When he was 16, Jones, along with a couple of his peers staged a bank robbery at the Army-Navy Bank which was located near the Pentagon. Local authorities were not able to secure him and his gang which marked Jones' first attempt at a large-scale crime a success, in turn, giving him and his gang confidence to do more.

Still attending high school and at the same time organizing heists, he and his friends soon had cash, pieces of jewelry and other luxuries stacking up which raised the suspicion of the police. An investigation was put underway and he was soon arrested and was sent to a juvenile detention center for his actions.


The Drug Kingpin Of Hanover

He spent a fair amount of time serving behind bars until his release in 1975. By the time of his release, he already established a lot of connections internally to the drug trade industry. He conceived a plan to smuggle cheap supplies into his Hanover neighborhood from Amsterdam and Thailand which consisted of PCP, heroin, cocaine, and crack. With a growing number of clients, he also started experimenting said drugs. The result of his experimentation is the drug called "butt-naked" which came to be from mixing marijuana and PCP. Butt-naked made the users strip their clothes as an effect hence, the name. Another new drug that resulted from his operations' experimentation is the "love-boat". Love-boat has a rough side effect which made its users harm or even harms others, aside from suffering from hallucinations.

This business ordeal brought in a lot of money that granted him and his family a comfortable life. He even extended his generosity to his neighboring community and funded the local boys' club and even athletes. With his support, a lot of young and aspiring individuals were granted a scholarship and had access to good schooling and education.

At the end of 1979, he was arrested for drug possession and served two years in prison. When he was released, he came back to the drug trade industry with more connections which made his business more flourishing in Hanover. Due to his connections, he was able to execute the first "open air" drug market in America. With a growing mind in other business, he decided to purchase clubs and real estate by the mid-1980s but authorities still laid their suspicious eyes on his excess wealth.

On October 29, 1985, he met up with a dealer who turned out to be a wired informant that cemented all the necessary evidence for his arrest. Jones was charged with conspiracy to distribute and possess that gave the authorities the warrant needed for his case. Eventually, his drug trade and other dealings were discovered and in the end, he was sent to serve his time in Leavenworth Federal Penitentiary which is located in Kansas in 1986.

He served nine years in prison and was released in 1995 where he started to work with a clean slate in his Hanover neighborhood. Currently, he works as a volunteer to rehabilitate ex-convicts at a nonprofit organization called Miracle Hands.