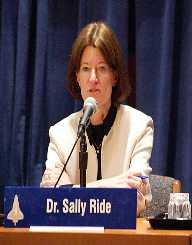 Sally Ride was born Sally Kristen Ride on May 26th, in 1951. Growing up in Los Angeles, she later joined Stanford University. Here, she majored both in English and Physics. In 1973, she successfully graduated from both subjects with a bachelor’s degree. With a special interest in mathematics, she opted to pursue it as her master’s course. She graduated two years later in 1975. Three years down the line, she earned her Ph.D.

After completing his education, Sally Ride participated in a competitive program that was looking for applicants to participate in the new space program. Ride was successfully chosen out of the thousands of candidates to join NASA (The National Aeronautics and Space Administration). She however attracted media critics owing to her gender as a woman.

Regardless of the media critics that had faced Sally Ride, she went on her first trip to space on June 18th, 1983. Her achievement earned her high acclaim for she was the first American woman to travel to space. Earlier on, two Soviet women had travelled to space. First was Valentina Tereshkova who travelled in 1963 and later, Svetlana Savitskaya travelled in 1983.

The following year in 1984, she travelled to space again. In both instances, she was in space for a total of over 343 hours.

After retiring from NASA, Sally Ride went on to become a professor at the University of California in San Diego. She took up the role of a physics professor at the institution. In 2001, Ride drew her inspiration as an astronaut to establish Sally Ride Science. This was a company that would aid in motivating young girls more so in their math and science-related careers.

Sally Ride exchanged vows with Steve Hawley, a fellow astronaut in 1982. However, their marriage was short-lived as they divorced five years later. Rumor has it that Ride was also in a relationship with Tam O'Shaughnessy for about 27 years. This was not realized until then after she had passed away.

Sally Ride passed away on July 23rd, in 2012. She was only 61 years old at the time of her demise. Her cause of death was as a result of pancreatic cancer that she had been diagnosed with seventeen months before she died.