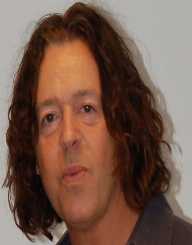 Although he was born in Havant, Hampshire, he was raised in Leigh Park prior to moving to Bath.  While in Bath he attended Culverhay School. Due to his father’s nervous breakdown, he had a strained relationship with his father. So he read a lot and spent time away from his father. While this was going on, Roland also studied theatre and became a member of the Zenith Youth Theatre Company, in Bath.  In that time he met the man who would become the co-founder and bandmate of him in the group Tears for Fears, Curt Smith.  The two were attending Beechen Cliff School, a men’s high school and became friends.

While his father was bedridden, he and his wife started their own entertainment company. So Roland grew up around people in the industry as they came to his house to do business with his father.

The two, Curt Smith and Roland Orzabal started the group Graduate in the 1970s and produced one album.  However, the group didn’t last and the band disbanded. However, the two remained active in the music field, being involved with other music groups and producing music.  Some of those albums are actually available for purchase. Years later in 1981, the two formed the group Tears for Fears.

The group Tears for Fears have sold more than 30 million albums all over the world. The group for ten years remained together and recorded several hit singles and sold many albums.  They also toured in concerts both in the UK and outside.  But in 1991, due to a falling out, Roland Orzabal left the group Tears for Fears and started out on his own.  He did, however, return to the group in 2000, to produced and record a new album. The group was more successful together for Roland than Roland on his own despite his making a name for himself as a songwriter and producer, as well as a singer.

After the band reunited the band played their first full-length concert in the UK in 2017.  The last full- length concert the band had played together was in 2005.  They have toured London, California to name a few and other places.  To their credit, the band has some awards and Roland has some to his own credit as well.

Despite his split from the group Tears for Fears, he still used the name for his solo projects.  He released a single and an album under that name. He did, however, work with other artists such as Emiliana Torrini as he produced her album in 1999.  He also co-produced Oleta Adams album Circle of One in 1990. That album reached No. 1 in the UK but only reach No 20 in the United States. The only album to be released under Roland Orzabal’s own name, “Tomcats Screaming Outside” was released in 2001.

Roland Orzabal won awards for his work with the group Tears for Fears. His song “Everybody Wants to Rule the World” as well as “Songs from Big Chair” won the Brit Award for Best British Single in 1986. Roland also won two Ivor Novello Awards as well as Songwriter of the Year twice.

Despite his busy schedule, Roland found time to find love. He married Caroline Jonhston in 1982 and the two remained married until her death in 2017. From this union, they had two sons, Pascal and Raoul.

Roland likes astrology, photography, sociology, and international politics. He also loves cats. He wrote a book that was published in 2014 called Sex, Drugs, and Opera. His first attempt wasn’t a good one so he decided that this book would be partly biographical. That is the one they published. He himself feels that his career has allowed him to do many things he otherwise couldn’t have done had he been ordinary.

He also felt and feels that it is more about the song and creating it for him than it is about the performance. But the artist will win out and he will sing it for the world to hear and enjoy and him to make money. Although he has retired from the music industry at the age of 57, he still will be available for his family should they choose to go that route.