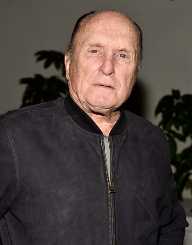 Robert Duvall was born on January 5, 1931, in San Diego, California. His parents were William Howard Duvall and Mildred Virginia Duvall. He also has two brothers named John and William. Duvall’s mother was a beginning actress at the time of his birth, and this may have encouraged Duvall to take up acting in the first place.

Robert Duvall attended the Severn School for his general knowledge. He later when to the Principia school in St. Louis, Missouri for higher education. He graduated from this school in 1953. Afterward, he enrolled in the Principia College, which was not located in Missouri, but Illinois.

Duvall did not begin any formal acting training until he was enrolled at the Neighborhood Playhouse School of Theatre, which is located in New York. He attended this school from 1955 to 1957.


Careers Outside of Acting

Duvall worked some odd jobs before he broke out into acting. He did this work, not because he particularly loved it, but because he needed the position to make enough money to survive. Some of his odd jobs included working for a post office and department stores.

In 1953, Robert Duvall was drafted into the army. This did not stop him from working on his acting career, though. While in the service, he worked on a comedy play with other troops. He was released from the army in 1954.

Robert Duvall broke out into acting in the 1950s. He spent most of his time working on the stage, rather than in front of a camera. He was also in several TV series, being a side character or a guest star for an episode or two. Some of the shows he spent time on were Naked City and Great Ghost Tales.

It wasn’t until 1962 that Duvall made his first appearance in a serious movie. He played the infamous character, Boo Radley in How to Kill a Mockingbird. This video helped him to gain popularity, which helped him to get more roles. However, he did not do many more movies. He continued to spend most of his time working on TV series. Some of his most famous TV series are listed below.

The Fugitive, Combat!, The Wild Wild West, The Outer Limits

It wasn’t until about 1970, approximately 15 years after he had begun his professional acting career that Robert Duvall broke out into a film. He was in the MASH movie in 1970, and in the recent movie, In Dubious Battle, in 2016. He usually plays hardcore villains or characters in western movies.

However, he is such a talented actor that he would play just about anyone who he wanted to. He shows no signs of quitting acting anytime soon. Some of his most famous movies are listed below.

Throughout his career, Robert Duvall has won 56 awards and has been nominated for another 60. He has even won an Oscar in 1984 for Best Actor in a Leading Role for Tender Mercies. Some of his other significant awards are listed below.

As of 2016, Robert Duvall is estimated to be worth $60 million. He would be worth more, but he gives away a considerable amount of his money to charity.

Robert Duvall has set up a charity fund in his name with his current wife, Luciana Pedraza. This charity helps children and families in Argentina. He also supports another charity, Pro Mujer, that allows women in Latin America.

Robert Duvall has been married several times, but he has never had any children. His first marriage was to Barbara Benjamin. The couple tied the knot in 1964, but the marriage ended in 1975. His second marriage was to Gail Youngs. This marriage only lasted four years, from 1982 to 1986. This third wife was Sharon Brophy. This couple lasted five years, from 1991 to 1996. He did not marry again until 2004, to Luciana Pedraza. The couple is still married as of 2016.