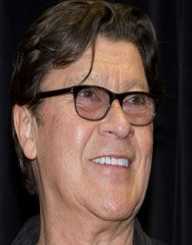 Robbie Robertson is a multi-awarded Canadian musician that came to fame as one of the members of the musical group named The Band.

Robbie Robertson married Canadian journalist Dominique Bourgeois in 1967 and have three children together named Alexandra, Delphine, and Sebastian. The couple's marriage did not last long and ended up in divorce.

Born on July 5, 1943, as Jaime Royal Robertson in Toronto, Canada, he was the only child of  Rose Marie and Alexander David Klegerman. His mother has traces of Cayuga and Mohawk in her lineage and worked at a jewelry factory while his dad was a professional gambler of Jewish descent.

He lost his father during his infancy in a hit and run accident leaving his mother a widow. Later on, she married James Patrick Robertson, her co-worker who later adopted him under his name.

The young Robertson honed his musical abilities at her mother's native place in the Six Nations Reserve where he learned how to play the guitar.

Robbie Robertson officially dropped out of school in 1959 when he was 16 to pursue music. Prior to that, he started playing locally alongside local bands and worked at the traveling carnival which inspired one of his works in later years entitled Life Is A Carnival.

He also played alongside Ronnie and the Hawks as one of its road crew during their tour. It was also while playing with the Hawks did he record his first two songs entitled Someone Like You and Hey Boba Lou. After the tour, the Hawks and Robertson turned to tour alongside Bob Dylan that drew mixed and negative reactions from Dylan's acoustic-loving fans. At the time, the Hawks crew was made up of Levon Helm, Rick Danko, Richard Manuel, and Garth Hudson.

Prior to The Band's debut, they worked and collaborated with Dylan every day near his home at New York which they called the Big Pink due to its color. They released Music from Big Pink, their debut album in August 1968 and was even quoted by The Rolling Stones and Eric Clapton's musical influence.

While in The Band, Robbie Robertson wrote 4 songs for the album of which two of them became a staple song name for the band. Robertson's work on the songs The Weight and Chest Fever became local track favorites and was even covered by other artists such as The Temptations, Aretha Franklin, Jackie DeShannon, and The Supremes.

Their self-titled second album contained popular tracks such as The Night They Drove Old Dixie Down and Up on Cripple Creek. The following year in 1970, their fame became widespread that they landed themselves on the cover of the Time magazine. They went to release other albums until the band's split in 1976 due to the growing tension between the songwriting credits that led Robertson and Helm in bad blood for years.

After The Band called it quits, Robbie Robertson immediately turned to produce wherein he was responsible for Beautiful Noise, Neil Diamond's 1976 album and even entered the film industry in the early 1980s. He played a role in the film Carny alongside Jodie Foster and Gary Busey and aided in the movie's musical production. After his work Carny, he collaborated with Martin Scorsese on the 1980 film entitled Raging Bull and also on Scorsese's other films such as The King of Comedy and The Color of Money.

In 1987, Robbie Robertson released his first solo album entitled Robbie Robertson which was released in October of that year. It was listed under the 100 Best Albums of the Eighties by Rolling Stone magazine. The album was also nominated for Best Rock/Vocal Album at the Grammy Awards and also won him the Best Male Vocalist of the Year, Album of the Year, and Producer of the Year at the 1989 Juno Award in Canada. His other solo albums include Storyville (1991), Music for the Native Americans (1994), Contact from the Underworld of Redboy (1998),  and How to Become Clairvoyant (2011).

He also has a number of books published under his name such as Hiawatha and The Peacemaker and Legends, Icons and Rebels: Music That Changed the World which was co-written with Jared Levine, Jim Guerinot, and his son, Sebastian. Robertson's autobiography entitled Testimony was published in November 2016 which took him five years to finish.