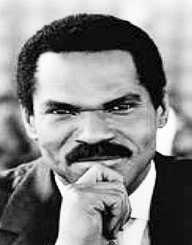 Reginald F. Lewis was born on December 7, 1942, in East Baltimore, Maryland, and grew up in a segregated Maryland. Despite the segregation, it was considered a middle-class neighborhood. He attended the Dunbar High school where he played three sports. He was the quarterback on the football team, forward on basketball and shortstop for baseball.

As a testament to who he would grow up to be, he was also the team captain on all three teams. Reginald also became the vice president of his high school class. Luckily, he won a scholarship for football to attend Virginia State University. However, a football injury derailed his hopes of playing professional football, and his attention turned towards his academics.

Reginald F. Lewis joined the Alpha Phi Chapter of Kappa Alpha Psi as an undergraduate student. And, he graduated with a degree in political science in 1965. That same year, Reginald participated in a program funded by the Rockefeller Foundation that helped him gain entrance into Harvard Law School. He was the only one in history to gain entry to the school without applying. He graduated that school in 1968 with his Juris Doctorate.

After law school, he worked for a private midsize to large law firm located in New York City. The firm’s name was Paul, Weiss, Rifkind, Wharton, Garrison, LLP. He stayed with that firm for one year and left two years later to start his law firm, on Wall Street, with some other parties. He practiced law in the corporate field for 15 years before leaving to start on his journey that became what the world knows him for- a venture capitalist.

Reginald F. Lewis formed the TLC Group, LP, in 1983, after leaving the corporate law field. Using his contacts and his business sense he then bought the first of two major business purchases that became million dollar businesses. The first company was McCall Pattern Company which Reginald bought for 22.5 million dollars. It was a home sewing pattern business. He raised $1 million and borrowed the rest from investors and investment banks to fund the 22.5 million dollar price tag.

One year after his purchase, the company was back in the black. By his becoming the helmsman, he freed up the company’s capital, then re-purposed the old machinery it had, hired his rivals to work for him within the company and started to export his business outside of the country. He made McCall Pattern Company a power to be reckoned with in the home sewing industry. He then sold the company for profit for the investors who gave him the money to purchase it in the first place. Thus he became known as a powerhouse in the venture capitalist business.

The next major company Reginald F. Lewis bought was Beatrice International Foods. He paid $985 million and changed the name to TLC Beatrice International. The company was known for selling snacks drinks and grocery store items. He became the first African American to own and manage a major business. To make the company viable, Reginald sold off some of the assets of the company and reinvested the money. That sale paid off and increased his profit by the end of the year for 18 billion dollars. The next year the company made a gain of 2.2 billion dollars.


The Philanthropy of Reginald

Reginald F. Lewis' philanthropic interests are known by many around the country and probably around the world. Being interested in maintaining the education and history of black Americans in the United States many of his projects are geared toward helping minorities particularly those that are black.

In 1987, he started the Reginald F. Lewis Foundation. This foundation fund grants for 110 million dollars to various non-profit programs and organizations. Giving back to those who gave to him seem to be his mantra. He offered Howard University a grant of 1 million dollars in the year 1988, and the federal government then matched the award to increase the total amount to 2 million dollars. The money was used to fund scholarships, fellowships, and also the sabbaticals of the faculty. To the law school he graduated from, Harvard Law School, he donated 3 million dollars in 1992. They named a building after him.

Wanting to see more of his history Reginald F. Lewis wanted to support museums. In 2005, he began to support the Museum of African American Culture located in Baltimore. He gave the museum a grant of 5 million dollars. It is also a Smithsonian Affiliate, which adds to its prestige.

Not to live his life alone, Reginald F. Lewis married Loida Nicolas, a Philippine woman with whom he had two daughters. Their names were Leslie Lewis and Christine Lewis. Upon his death, Loida Lewis took over his company and kept turning a profit as well as continued his philanthropy.

His children also continue to use his name to help fund and get funding from investors. There is the All-Star Code run by his daughter Christine. And his wife started the Lewis College Sorsogon City, the Philippines which she founded in her hometown. Let us not forget that the principal and current philanthropic venture to carry on his legacy the first Reginald F. Lewis Fellowship for Law Teaching will be beginning in 2019.

The fellowship will be for Harvard Law School from July 1, 2019, to June 30, 2020. The recipient will receive an annual stipend of $50,000 and also the chance to extend it for one additional year. The requirement is that you, however, live on campus for the duration of your fellowship.

As is evidenced by what is written above, Reginald F. Lewis has funded and given many people the opportunities he tried to extend in life via his capital venture business investments. He was indeed a smart man who used his smarts to raise others not knock them down.