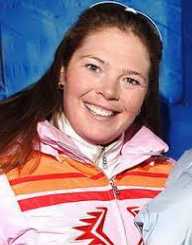 Picabo Street was born in Triumph, on 3rd April 1971 in the United States of America. She was the first American woman to win the Ski World cup title, where she won a gold medal in the Super G event in 1998 Olympics.

Picabo Street's parents left the decision of choosing her name to her, all through Picabo's early age she was merely referred to as ‘baby girl.'

She was later required to have a name for her passport her passport; she was named ‘Picabo Street' a name of a nearby town.

In her childhood Picabo was a tomboy, she competed with boys and. She developed Ski racing skills in their small farm in Triumph. She became a member of local of Hailey Ski Team from her local area.

Picabo Street went to Rowland Hall- St. Marks's School based in Salt Lake City, Utah.  At school, she became a member of the Ski team for one year. She later joined Sun Valley Ski Education Foundation, where she represented her school in various races.

Picabo Street was a naturally talented athlete with a body structure that suited the sport perfectly. At the age of 15, she was called to join the U.S junior ski team.

She made her world cup debut on 6th December 1992 in Slalom. Two months after the World Cup, she went to compete in a World Championship in Japan, where she took home a silver medal.

After participating in several junior events, Picabo Street was faced with a disciplinary issue. She was suspended for indiscipline, poor attitude, and poor physical condition.

She, however, proved to be a fierce competitor. At home, she trained with her father. She came back a year after. She was stronger and dedicated to the game. She came third in the U.S championship.

The best of Picabo's career came in the 1998 Winter Olympics; she won a gold medal at the Super G competitions. After the Olympics in 2002, she called it a day in the international competition.

While training in Colorado in 1996, Picabo Street was hit by a setback, and she suffered a knee injury. She was forced to sit out of the team for the remainder season in 1997.

While in Switzerland, after her gold medal in the Olympics, she crashed off course, tearing a ligament in one of her knees. The accident put her out of any completion for two years.

Several operations were done to fix her leg. Picabo Street refused to give up after her recovery; she trained hard, qualifying for the 2002 Olympic Games.

Picabo Street's parents are Dee, a music teacher, and Roland Street a stonemason. She has one brother, Roland Jr. who is one year older than her.

She married John Reese, a businessman on 3rd August 2008. She has four kids, three biological and one stepson. Treyjan James Pawley was a son from her previous relationship.

Her first son with Pawley, Dax Meyer, came in 3rd August 2009 and on 25th September 2010, on an event in Boise; she made it public that she was pregnant with her third child.