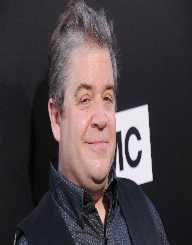 I know laughter is an all in one medicine for your soul, but the irony comes when you can’t laugh aloud when alone. Sometimes I wonder how this is done; but wait, there is someone who knows how to crack that midnight joke. He always makes other people happy each time he steps up on the stage. That’s why I am allowed to call him a stand-up comedian. He is none other than Patton Oswalt who came into the world on 27th January 1969 Portsmouth, Virginia, United States. As we speak, he is 48 years of age. At his middle age, he can be categorized as one of the most successful comedians, a trustable actor as well as a voice actor.

Patton Oswalt began his career 1988 where he was in Washington D.C. In 1992, he moved to San Francisco where he launched a television comedy. His first acting deal landed when he played a Seinfeld episode. He later went to Los Angeles in 1995 where he managed to hold the staff writer position at MAD. He was then starred in the HBO special “Comedy Central Presents” in 1999. In 2004 he began his standup comedy with his real name Patton Oswalt.

Since 1996 to 2012 Patton has played in several films such as Down Periscope, Magnolia, Calendar Girls and much more. He also had a chance to voice lots of animated episodes such as Kim Possible, Static Shock and Batman and beyond.

Still, in the motion pictures, Patton took a role of a rat who wanted to become a chef in 2007. That was his first leading role. In 2012, he was seen in the “Seeking a Friend for the End of the World Comedy Film.” On April 28th, 2017, Patton will also be featured on another film called “The Circle.”

We all understand that jokes are meant to entertain us and not to criticize us. But the irony comes when you post a statement on your social media, and everything comes falling at your place. This is what happened to Trevor Noah, a South African comedian on his Twitter platform. He once posted a funny joke, but his followers were against his ideal. The good thing is that Patton Oswalt defended him and all calmed down in seconds. After all, that’s what friends are for!

Patton Oswalt had a beautiful wife, Mitchell McNamara. She later died on April 21, 2016. No cause of death has been predicted till now. It was a complete and sudden shock for Patton’s family. According to sources, Mitchell went to sleep one night and never woke up the next day. Patton has one daughter Alice Rigney Oswalt.