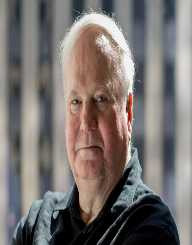 I have never heard of any other author that explained his real-life scene through writing. Being a novelist by profession, he perfectly blended his family’s raw materials into reality. You can only understand my point of view once you read one of his romantic dramas ‘The Prince of Tides.' Being raised and born in a military family didn’t simply mean that he was as tough as he grew up, NO! But he followed his parent’s rules to the core. Even then he was a buoyant basketball player in a short time. He came to major in writing as soon as he joined his primary level. Pat Conroy  will always be remembered for his high-strung works such as ‘The Boo’ and ‘The Water is Wide.' Allow me to introduce to you Pat Conroy’s life and achievements.

On October 26, 1945, Donald Patrick Conroy was born in Atlanta, Georgia, in the United States. His father, Donald Conroy was a Marine Colonel. His father’s service made Pat to live a disciplinarian life. Due to a regular transfer of Donald’s work, Pat had already lived and stayed in over 20 cities by the time he turned eighteen. The militia background immensely influenced Pat’s life. Even then Pat hated his father’s violent acts and abuses. That is where he opted to play basketball just to pass the time and cool his anger. He joined Citadel Military Academy, and in the process, he penned and launched his very first book named as The Boo.

After his education, Pat Conroy landed a teaching job in South Carolina where he majored in English. He was later terminated since he was afraid of following certain rules. He frequented several schools where he saw one thing-racism. There and then he penned his next book trailed as ‘The Water is Wide.' The book received both critics and recognition at the same time. His work excelled further after filming the book with the title Conrack in 1974.

After two years, Pat opted to narrate his childhood memoir and so he did it by writing a novel titled as The Great Santini in 1976.The story depicted his family’s background right from his crawling days. But his family didn’t take the matter lightly. Fortunately, his father changed his mood swings for the better. He correctly defined the meaning of being a protective father and a Colonel. As usual, he made a film of the same name which was released in 1979.He later followed it up with ‘The Lords of Disciples’ in 1980.The book illustrated the military life, racism and high level of discipline. The novel also received both positive and negative critics.

In 1986 Pat published The Prince of Tides that brought positive remarks to his fans and family. It went along and made Pat a recognizable author where he was tagged as the poet and prose stylist. Oh! And the master storyteller. It was the only novel that sold over 5 million copies and gained a global reputation. After a long wait, the film of the same name was created where it received the same response.

In the mid of 1995, Pat showed other authors no mercy. He released his sixth edition called the ‘Beach Music.' He followed it up with ‘My Losing Season’ that entirely narrated his college and basketball life. Following his success, Pat published his next work titled ‘South of Broad.' The book illustrated the importance of having a lovable father.

Next, in line, Pat Conroy wrote a cookbook titled ‘The Pat Conroy Cookbook.' He followed it up with ‘My Reading Life.' Here he explained how he loved to write and what influenced him in the first place. He then published ‘The Death of Santini’ in 2013.Ironically, the book revolved around a stickler for discipline father to a fond and affectionate dad. Unlike his previous book ‘The Great Santini,' it highlighted the good memories they shared with his family.

Pat Conroy married three times. In 1969 he married a widow, Barbara Jones. He adopted Jones daughters where they were later blessed with a daughter. Unluckily they parted ways in 1977. He then married Lenore Fleischer in 1981, and they had a daughter. The two divorced in 1995. In 1997 Pat married a writer, Cassandra King. The couple lived in South Carolina. Unfortunately, Pat Conroy life was cut short after he died of Pancreatic Cancer in 2016 at 70 years old.