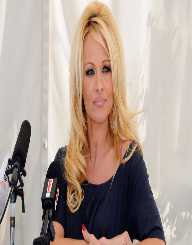 Pamela Denise Anderson was born 1st July 1967, to Barry and Carol Anderson. She was born in Ladysmith, British Columbia, Canada. Pamela Anderson came from humble beginnings, with her father being a heater repairman, and her mother a waitress.

Pamela Anderson’s notoriety began at a very young age when she was in the news for being the first baby born on 1st July 1967, which was the 100th anniversary of the official founding of Canada.

Pamela Anderson also had a difficult childhood. She was sexually molested by a female babysitter over a four-year period from age 6 to 10, and when she was 12, she was raped by a 25-year-old man. When she was 14, she was gang-raped by her boyfriend and six of his friends.

Pamela Anderson studied at Highland Secondary School in British Columbia and graduated in 1985.

In 1988, Pamela Anderson moved to Vancouver and began work as a fitness instructor. In 1989, whilst at a football game in Vancouver, she was featured on the Jumbotron wearing a t-shirt advertising Labatt’s Beer. The brewing company saw Anderson and hired her for a short while as their model and spokesperson.

From there, in October the same year, Pamela Anderson graced the cover of Playboy. As her modeling career blossomed, she moved to Los Angeles to take advantage of the opportunities. Playboy selected Anderson again in February 1990, to be their Playmate of the Month. During the 1990s, Anderson appeared several times in Playboy.

After she moved to Los Angeles, Pamela Anderson began auditioning and won the role of Lisa in the hugely popular television comedy, Home Improvement, with Tim Allen. She was with the show for two seasons, after which time she left and was then awarded the role of C. J. Parker in Baywatch.

Pamela Anderson was with Baywatch for five years, from 1992 to 1997. It was her Baywatch role that made her instantly recognizable to the public and gained her international stardom.

In 1994, Pamela Anderson debuted in her first film role. The movie was called, Raw Justice. Her next movie was in 1996, called, Barb Wire.

After leaving Baywatch, Pamela Anderson joined Sony Pictures Television in the role of Vallery Irons, in the television series, V.I.P. The series ran for four years.

Throughout the ensuing years, Pamela Anderson continued to take on roles and periodically continued to appear in Playboy.

Pamela Anderson appeared in other magazines as well, including GQ, Marie Claire, and Elle.

Pamela Anderson released a book in 2004 called Star that she had co-written with Eric Shaw Quinn, followed by its sequel in 2005, called Star Struck. She did a nationwide tour to coincide with the book’s release, for Wal-Mart, doing book signings for fans.

For the next several years, Pamela Anderson continued to perform and entertain, sometimes controversially but always making headlines.

From 2010 through to 2012, Pamela Anderson appeared overseas in several of the Big Brother franchise shows, including in India, the UK, Germany, and Bulgaria.

In 2010 she also appeared in the tenth season of Dancing with the Stars but was eliminated along the way.

Role As An Activist

Pamela Anderson has been very prominent and vocal as an animal rights activist, through the organization called PETA. In 1999, she campaigned against wearing fur.

Pamela Anderson is very good friends with Paul Watson, founder of the Sea Shepherd Conservation Society, and she has traveled with the group to campaign against the pilot whale hunts by Japanese fisherman.

Apart from being an animal rights activist, Pamela Anderson became the spokesperson for MAC Cosmetic’s, MAC AIDS Fund in 2005, to help people who were affected by AIDS and HIV. Anderson traveled to several countries to raise funds.

She also became the spokesperson for the American Liver Foundation.

Other organizations and causes that Pamela Anderson has been involved with include legalizing cannabis, and the Friends of the Israel Defense Forces. She has also spoken out in defense of Julian Assange, the WikiLeaks founder.

Over the course of her career from 1991 to 2017, Pamela Anderson has been in 23 movies, and appeared in 32 television programs, either in a series or individual appearances.

Pamela Anderson has had a turbulent romantic history. She has been married three times, including to Tommy Lee, a rock band musician in Motley Crue in 1995 and divorced in 1998.

Her third marriage was to Rick Salomon, a professional poker player, in 2014. They divorced in 2015.

Pamela Anderson established The Pamela Anderson Foundation, who’s aim it is to support and fund organizations and individuals who stand up for human, animal and environmental rights.