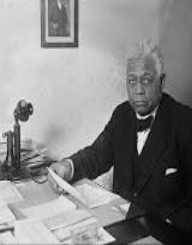 Barrack Obama, America's first black president, instituted great sensation by being elected. The 21st-century American society is also, at least externally, somewhat forgiving to racial differences. This makes us comfortable with the fact of the USA having a black president. The 20th century America, though, was thus by Oscar Stanton De Priest, a black statesman, and his political success.

Oscar Stanton De Priest, the future defender of African-American right, became such for a reason. He was born to the former slaves on March 9, 1871, a time which was still far from seeing racial prejudices disappear. His home was in Florence, Alabama, a state which was infamous for its racism-related crimes and white supremacy ideas. Just as many other African-Americans, the De Priest family move to another state to escape such conditions. They moved to Kansas in 1879.

After studying bookkeeping in Salina, Kansas, Oscar eventually moved to Chicago to make a decent future for himself. Initially, he changed a few low-paid jobs before starting his own business. His industrious character, intelligence, and diplomatic nature quickly allowed him to amass wealth as a contractor. He also ventured into real estate and used the money not only for himself; he helped African-American families with their finding a decent home.

His business also involved him in some civil affairs, which made him visible to the political parties. Oscar Stanton De Priest was inevitably noticed by the Republican Party who attracted him in their lines. In 1904, thanks to his affiliations, he became a Cook County commissioner. Ten years of political experience and rise saw him become Chicago’s first black alderman. It is important to note that chance itself was not the sole reason for De Priest’s success. He was fully aware of his skills and qualities. He had political ambitions and knew that his civil affair would make political parties take an interest in him. The Republican Party was a great way of getting his ideas through.

Almost immediately after entering his political career, Oscar Stanton De Priest was associated with a serious controversy. He accused of bribery and corrupt activities, but also acquitted soon after. Despite the ill beginnings, he quickly became famous for defending the rights of African-Americans. It was a whole ten years later that he broke the political rules of America. In 1928, he became the first black congressman outside the South, as a representative of the First Congressional District of Illinois. His fight with racial discrimination on all level in the United States quickly justified his electing.

He was also the only black congressman for a substantial period and this fact drew attention to the African-Americans. His first real impact on American politics was the 1933 amendment, which sought to ban racial discrimination in the Civilian Conservation Corps. He tried to implement many other changes. The Senate, though, had many representatives from the South, who were overwhelmed by racial prejudices. That is why the fact that his wife was invited to tea at the White House caused such media sensation at the time. Jessie De Priest, his wife, reached the national news – proof of what the 20th- century society treated as unusual.

Oscar Stanton De Priest's political career eventually deteriorated, primarily because of his opposition to the popular reform of F. D. Roosevelt. By 1934 De Priest had left the political position of sole representative for African-Americans. During WW2, he once again became Chicago alderman, until 1947. Thus he re-initiated his business and died at the age of 80, on May 12, 1951.