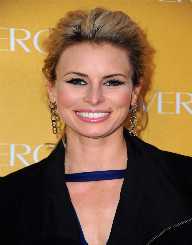 American model Nicole Renee Taylor was born on March 5, 1975, in Fort Lauderdale, Florida. Her father was a highway patrol lieutenant, and her mother- a photographer. Taylor grew up in Pembroke Pines, Florida. She attended the Cooper City High School. Taylor has two sisters- Joelle and Krissy.

Taylor began her modeling career when she was 13 years old. She was discovered and soon signed with Irene Marie Models in South Florida. She met the photographer Jean Renard, who later became her manager. After this, Taylor went to compete in the New York’s Fresh Faces contest, which she won. The contest not only gave her recognition but also awarded her with a $500,000 modeling contract. Her first magazine cover was in the August 1989 issue of Seventeen magazine, when she was 14 years old. The following year, she was already on the cover of Vogue, becoming the second youngest person to be on the cover of this magazine, after Brooke Shields.

After appearing in Vogue, her career began to grow rapidly. Taylor was named one of the People’s magazines 50 Most Beautiful People in 1991. The following year, she became the first model under 18 to sign a major contract with Cover Girl. She became the spokesmodel and featured the company’s national advertising campaign. She also worked with brands like Liz Claiborne, Nokia, Ellen Tracy, L’Oreal, Gap, Lee Jeans and many others. In 1992, she simultaneously had six major billboards in New York’s Times Square.

Besides her career as a model, Taylor has also appeared in the media. She was featured in the program Lifestyles of the Rich and Famous and covered events for NBC. She was a guest star on MTV’s Fashionably Loud. In 2005, she opened her clothing store Abbie and Jesse’s in Franklin, Tennessee. The same year, she also launched her first fragrance Begin by Niki Taylor.

In 2007, Taylor founded the Begin Foundation for the Advancement of Women in Business. In 2007, she appeared on Tyra Bank’s talk show. Taylor was also a host on the series Make Me a Supermodel, which she hosted together with male model Tyson Beckford. Taylor hosted the shows the first season but did not return for the second, since she was pregnant.

In 2011, Taylor became one of the contestants in The Celebrity Apprentice. For her efforts on the show, Taylor gained $35,000 which she donated to American Red Cross.

Taylor graduated from high school in 1993, and a few months later met Miami Hooters linebacker, Matt Martinez. In January 1994, they married in Las Vegas. However, later that year they had a more traditional wedding ceremony. Soon after their marriage, she gave birth to their twin sons Jake and Hunter. The couple divorced in 1996.

In 2006, Taylor got engaged with the NASCAR driver Burney Lamar and married later that year. The couple had a daughter Ciel in 2009 and a son Rex Harrison in 2011. She and her family currently reside in Brentwood, Tennessee.
In 2001, she was critically injured in a car accident in Atlanta, Georgia, when her boyfriend Chad Renegar lost control of the car while answering his phone. She has a collapsed lung and serious liver injury, as well as broken back. She sent six weeks in a coma and had to undergo 56 operations.