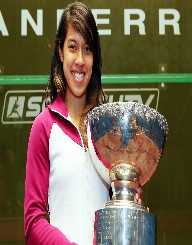 A squash player, Nicol David perfectly knows how to take her skills to the next levels. In that remark, she turned out to be the topmost Asian to attain the first position in women’s squash league. Before holding a ‘professional player’ label, Nicol took more time to familiarize with the said game. She loved to self-train herself, and in the end, she proved that everything was possible. She did make a huge difference by simply hitting a ball on her own. At the end of it all, she opted to forgo her future career where she embraced sporting. As a result, she was named as the youngest player to garner a World Junior Championship in 1999 and 2001.In the process; she teamed up with WISPA-Women’s International Squash Association where she won several championships. Read further to know more about her early and later achievements.

On 26 August 1983 Nicol David was first seen in the world in Penang, Malaysia. Her father is called, Desmond David who serves as a Malaysian engineer and a former athlete. Her mother is called Ann Marie David who is now a former Chinese teacher. Nicol still loves to spend time with her two siblings, Cheryl and Lianne. Since she joined her preparatory school, she got interested in mathematics. It was in the process that she dreamt of becoming a promising engineer just like her biological father. Nicol enrolled at Covenant Green Lane Primary School in England. Later on, she joined Penilaian Menengah Rendah a lower secondary examination where she scored seven straight A’s. She followed it up with other seven A’s in her final National Examination called Sijil Pelajaran Malaysia. She then joined Covenant Green Secondary School where she completed her upper-level education.

At eight years old, Nicol was lucky to meet her sports tutor at Bukit Dumbar Squash Center. It was here that she was selected to represent her locality in 1992 National Junior Interstate Championship. She did her best where she went back home with a silver medal which was her first national award. Early in 1994, Nicol surprised her fans by winning several international recognitions including the Hong Kong U-13 tournament.

Before the beginning of new millennium, Nicol David received a Women’s Junior Squash title in Belgium. It was there that she garnered a world’s junior champion title at only 15 years old. Still, in 1999 she teamed up with tournaments like British Junior Open Championship and German junior Open Under-19.In the new millennium, Nicol showcased her incredible skills at Women’s International Squash Players Association. In the long run, she garnered WISPA recognition. It was also in 2001 that she won again as the World Junior Squash Championship winner. She later played at the Asian Junior Squash Championship as an individual, and as a norm, she won in the end.

In the mid of 2005, Nicol David was labeled as the very first Malaysian woman to receive a British Open recognition. Not to mention she was also named as the first Asian to have received a crown in women’s squash category. It was also in the same year that she garnered a World Open title in Hong Kong and the process he finalized with a number one rank in 2006.

In the mid of 2006, Nicol showcased her indelible performance at the World Open title. It was here that she defeated a squash player guru, Natalie Grinham in the finals. Before the end of 2006, Nicol received the Best Female Player title for two years in a row. After two years, Nicol defended her title when she garnered 10-tour titles. In the process, she managed to retain her number position in the World’s Women Squash Rankings.

Early in 2009, Nicol garnered her 2nd Seoul City Open where she remained with the previous title. It was in the mid of 2010 that she won her sixth recognition at Kuala Lumpur Open Tournament. She followed it up with women’s singles finals in 2010 Commonwealth Games in Delhi. From 2011 to 2014 Nicol garnered championships like US Open, British Open, and World Open.

From 2006 to 2010 Nicol David garnered several recognitions and awards. Some of the notable ones include the World’s Best Number one woman. In 2008, she managed to retain her first rank to the end of the year. She also garnered the World Open Championship for not one but five times from 2008 to 2012. From 1998 to 2011 she received an Asian Squash title for winning eight times consecutively. In the mid of 1975, Nicol received an Order of Merit called D.B or Darjah Bakti. She was also honored with a DSPN. For six years, Nicol garnered a WISPA player of the year recognition. Throughout her career, Nicol has never shown any signs of weakness. She always aims for the highest, and at the end of it all, success came her way.