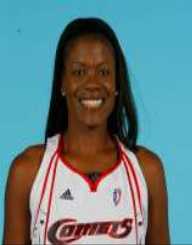 In 1993, during her senior year, while Sheryl Swoopes was playing with the Texas Tech Lady Raiders, they won the NCAA women’s basketball championship. Sheryl Swoopes is one of only three players to have had her playing jersey retired by the school. She set several records in different categories, many of which were still standing over ten years later.

In 1994, Sheryl Swoopes made the cut for the USA national team to compete in the World Championships, which they won. She stayed on as part of the team for the 1996 Olympic Games, and she competed in the 2000 and 2004 Olympic Games. The USA won gold at all three.

Sheryl Swoopes continued to represent her country at both the 2002 and 2006 World Championships. The team won gold in 2002, but only managed bronze in 2006. She became a free agent in 2011 but wasn’t signed by anyone. Although she didn’t make an official announcement in relation to retiring from the game, she referred to herself as “a former professional basketball player.”

In 2013, Sheryl Swoopes was appointed head coach of the women’s basketball team at Loyola University in Chicago. In 2016, it became evident that something was amiss. Ten of the players had either left the team or wanted to be released from their scholarships. The university announced they were going to do an investigation into the situation. In July 2016, Sheryl Swoopes was fired. Investigation results were not released.

Sheryl Swoopes returned to Texas Tech in 2017, hired as the Director of Player Development for the women’s basketball program. In January 2018, she was promoted to Assistant Coach.

Sheryl Swoopes has many records and honors to her name. Some of her other awards include:

1993:   Associated Press Athlete of the Year

2017:   Inducted into the Women’s Basketball Hall of Fame

In 1995, Sheryl Swoopes married Eric Jackson. The couple divorced in 1999. They had a son together.

In 2005, Sheryl Swoopes announced she was in a gay relationship with Alisa Scott, another former basketballer, and current assistant coach. They separated in 2011.

Late in 2011, Sheryl Swoopes got engaged to Chris Unclesho, a friend of many years. The couple married in 2017.