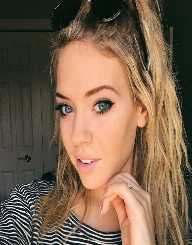 Nicki Gruttadauria, also known as Nicki Grutt, is a social media star in the making. She is an Italian American and considered to be among the top 12 percent of the most influential people in the digital world according to the social media analytics and intelligence platform Klear. Her engagement level is very high according to Klear.  She also hopes to become an adagio figure skater. She shot to fame after she became the girlfriend of Vine star Dylan Dauzat in 2015.

Nicki Grutt was born on 9th July in Westlake, Ohio. Her star sign is Cancer. Her celebrity status is very recent. There is not much information about her childhood and parents. She seems to come from a typical Italian American extended family with happily married parents. She has a younger sister named Alyssa.

Nicki Grutt began her online journey with her first twitter post in 2011. She started by posting selfies on Instagram and Twitter. She was beautiful and attractive and did attract a fan following in the initial years but not a huge one.

Nicki Grutt became famous when she met Vine and YouTube star Dylan Luke Dauzat. The meeting was during a Digifest event in Cleveland in July 2015. She was invited on stage to be sung to by Dylan. They soon began dating. Dylan Dauzat has over 1.6 million followers on Vine and more than 21 million YouTube views. He is also famous on Twitter and Instagram. Pictures of the couple began to appear after their vacation in Cabo San Lucas, Mexico in April 2016.

The pictures appeared on Instagram and Twitter. On June 2016 the Vine star publicly confirmed on social media that he had been dating Nicki Grutt for nearly a year.

Nicki Grutt earned a lot of followers from the fans of Dylan. She is a clear example of how you can become a sensation in the online community if you know the right influencers. Her figure skating skills and beauty also helps attract the attention. She also engages regularly with her fans which increases her fan base every day.

Nicki Grutt has done modeling assignments. She has done various modeling work including the VeryRareCreative Campaign benefitting The American Foundation to Suicide Prevention.

Nicki Grutt has been a competitive figure skater for ten years. She has also taught skating classes for USFSA. As a skater, she has been asked to audition for Disney on Ice and a production company in Mexico. She is an aspiring adagio figure skater. Adagio skating is a form of pair skating commonly seen in ice shows. The skaters perform many spectacular acrobatic lifts. They, however, perform little or no singles elements which competitive pairs must perform.

Nicki Grutt has dated Dylan Dauzat for over a year. However, only a month after he publicly accepted the relationship, there were rumors that the couple has separated. The reasons behind this or the truth about it are not known.