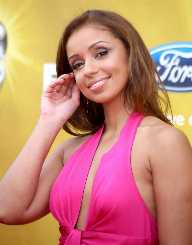 Mya is an American songwriter, singer, dancer, and actress born on October 10th, 1979. She is famous for her "Lady Marmalade" cover contributions with Pink, Christina Aguilera, and Lil’ Kim. Among her hit singles include “My Love is like...Wo." Before her fame, she gave performances at Kennedy Center and was an outstanding tap dancer. In fact, she had a group called Tappers With Attitude or T.W.A. The multitalented Mya has collaborated with music legends including Missy Elliott among others.

Mya was born on October 10th, 1979. Her place of birth was in Washington, D.C. in the United States. She is the daughter of Sherman and his wife Theresa and has two kid brothers Nijel and Chaz. Her mother served as an accountant. Her father, on the other hand, was a musician.

Growing up, Mya always learned how to play the violin. However, dancing was her favorite activity after school. She was only 2 years old when she began ballet lessons. This was in 1982. Later when she turned four, she also learns tap and jazz. At 16, Mya graduated from her high school studies upon which she joined the University of Maryland, College Park for a few classes.

In 1998, Mya's debut self-titled album was released. It comprises of hit singles such as “It's All About Me" and "Movin' On." She appeared in the soundtrack Bulworth. Also, she has made major contributions in Life and The Rugrats Movie soundtracks.

In 2004, Mya featured in Havana Nights followed by Cursed in 2005. In 2009, she also acted a role in The Penthouse. In the fall of 2008, her album Sugar and Spice was released in Japan. The following year, the mixtapes Beauty in the Streets and Best of Both Worlds were released.

Mya has shown great philanthropy through her humanitarian projects. She established her nonprofit organization called The Mýa Arts & Tech Foundation in 2005. This foundation aimed to support the disadvantaged youth. Mya also opened the Out 100 Awards as a way of advocating for gay rights. Also, she chaired the Operation Smile Event in 2009.

In 1998 till 2002, Mya was in a relationship with Silk the Shocker. Her next boyfriend was artist Bryce Wilson whom they dated from 2002 till 2004. Supposedly, she had found out that Wilson was cheating on her. In 2005, she began dating singer The Game though briefly. Larry Johnson followed till late 2011upon which she began dating DeSean Jackson. Within five months they had broken up.