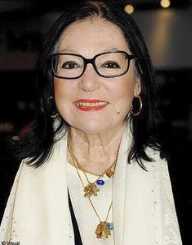 Nana Mouskouri is a best-selling singer from Greece. She is known for her work in many genres, particularly jazz.

Nana Mouskouri was born on October 13, 1934, in Chania, Greece. Her name at birth was Ioanna Mouschouri.  Her father Constantine moved the family including mother Alice and older sister Eugenia to Athens while Nana was still a toddler. He worked as a film projectionist. Greece was under Nazi occupation during her childhood.

Schooling was difficult to come by during the wartime. Mouskouri enjoyed singing and would sing all of the time.  Both Nana and Eugenia were talented singers and started their training at the Athens Conservatory. But the family struggled financially, and Eugenia chose for Nana to continue her studies there.

Even though she was learning classical singing, she was inspired and motivated by jazz. When the conservatory found out, she was not allowed to finish her final exams and did not complete her studies.

Mouskouri's jazz singing in cabarets was what got her kicked out of music school. However, she was not deterred.  Nana Mouskouri won the Greek Song Festival in 1959.  She and Manos Hadjidakis worked on the song “Kapou Iparchi Agapi Mou (My Love is Somewhere)” which was the beginning of her career.  Mouskouri gained international recognition when she recorded “Weisse Rosen Aus Athen (The White Roses of Athens” for a documentary. The hit song sold over one million copies.

In 1962, Mouskouri was able to work with famed music producer Quincy Jones on a jazz album, The Girl From Greece Sings. It was her first English album singing American standards. She worked with other notable musicians and singers including Harry Belafonte. They even toured in 1966.

Overall, Nana Mouskouri was most popular in Europe.  She had success with albums in a variety of languages including the French album Le Jour Ou la Colombe (1967) and the British album Over and Over (1969). While Mouskouri speaks five languages, she was able to sing her songs in more than 15 languages. She toured the world, performing in concert from Royal Albert Hall in London to the Sydney Opera House as well as on television series.

Mouskouri was also involved in politics as well as music. From 1994-1999, she was a member of the European Parliament.

Nana Mouskouri retired from concert tours in July 2008. Her final performance was in Athens with more than 10,000 fans in attendance. She went on to be active in humanitarian work.  Mouskouri did come out of retirement in 2011 with new music from Greece and to perform her German hit “The White Roses of Athens” 50 years after its initial release.

One of Mouskouri's trademarks is her black-rimmed glasses. She wore them everywhere, including on stage. She almost quit a tour with Harry Belafonte because he suggested that she removed them on stage. Belafonte, however, honored her wishes to keep them on.

Nana Mouskouri married musician Yorgos Petsilas in 1961.  They had two children; a son Nicolas and a daughter Helene. The couple divorced in 1975. Mouskouri later married music producer Andre Chapelle in January of 2003.  The couple lives mostly in Switzerland.

Nana Mouskouri was a UNICEF Goodwill Ambassador in 1993.  She works as a child rights advocate, visiting the young who were displaced in the armed conflict.  Not only would she visit the countries where children needed help like Bosnia, Mexico, Chile, and Vietnam, but she would also participate in fundraising activities. She also aided her homeland when it was struck by a major earthquake in 1999.

Sold over 300 million albums in over 15 languages

Over 300 gold and platinum records

National Honor of Quebec for her career and humanitarian work, 2013